It’s not even February yet, and it feels like Spring. Sun is shining, days are pleasant, and even some of the plum trees in our alley are already blossoming. I haven’t had to turn on the heat in my studio for nearly three weeks. Global warming? Maybe, but it’s probably the old California La Niña weather pattern in effect again. Of course, that may also be why the eastern half of the country is having so much snow and freezing weather. 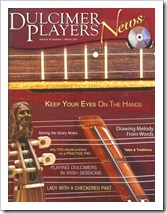 I have to toot my horn here. Yesterday, I got probably the biggest surprise of the last several years. One of my dulcimers, “The Lady With a Checkered Past”, is in the Winter, 2011, issue of Dulcimer Players News (scanned cover on the right), in a lovely article written by her owner and professional banjo and dulcimer player, Mary Z. Cox. Not only is the article interesting, but flattering. I feel honored she wrote about the dulcimer and complimented me on my work. Of course, the biggest surprise was when I opened the envelope the magazine was mailed in and saw “The Lady” on the cover! If your local book store doesn’t carry Dulcimer Players News, contact the DPN website to get an issue. It’s a wonderful magazine, and there’s always good articles on both Mountain and hammered dulcimers. 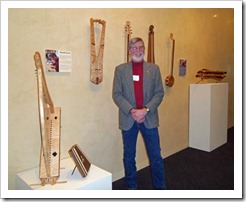 A couple of weeks ago, I attended the artist reception at the Baulines Craft Guild Master Annual Exhibit at the Marin Community Foundation, 5 Hamilton Landing (2nd floor), Novato, California. The show runs to March 17th, and the Foundation offices are open Monday through Friday from 9 to 5. The reception was great fun, and very well attended, including a school group of young teens who seemed very interested in the crafts. There are around 250 craft pieces on display around the large building, which is a remodeled hanger that used to house planes when the area was the Hamilton Air Force Base. I have six instruments on display, and my Summer student has two. The works of other Baulines Craft Guild members include fiber art, ceramics, glass, metalwork, and,of course, woodwork, including pieces by legendary Gary Knox Bennett and TV host and instructor David Marks. See the show if you can. I think it’s pretty spectacular. 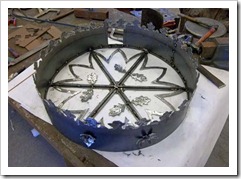 In my last post I mentioned I was getting ready to start a Cabrillo College extension course on Lighting and Warm Glass. Well, I did it. Even with the head and chest cold I was carrying around the first week, I was able to design and build a new chandelier for our dining room. For years my wife and I hated the cheap and ugly chandelier that hung over our dining room table but were never able to find a replacement we both liked. Now we have a new “old” chandelier we love. I did some research on medieval and renaissance lighting fixtures and found one that fit the bill. 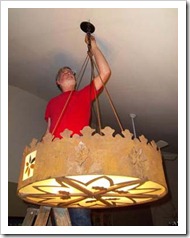 However, it was all metal, and I hadn’t worked with metal (cutting and welding) for nearly 35 years. Also, the type of metal cutting and welding at the class is much different than what I used to do back then. Cutting was done using a plasma cutter, which, when used correctly  can make fairly intricate, fine, and decorative cuts (it took me a few days of practice). I was working on it right up to the last minutes before the “artist” reception the evening of the last day. I spent quite a bit of the last day adding special “rust” patination to the piece. It really makes it look medieval. The next two days after the class was over I spent wiring and installing the chandelier. With the dimmer on low, it looks like candle light shining through the sandblasted glass. (Yes, I also learned how to bend and sandblast glass.) It was an intense two weeks, but fun and rewarding. 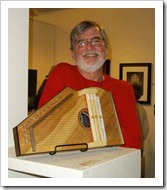 Finally, last week was the reception for the Santa Cruz Art League Members’ Show (A – K). I have one of my newest instruments on display there: The Dolgeville Autoharp, Model 1. It’s a reproduction of the original 3-chord 1885 Zimmermann autoharp. The Zimmermann Company started out in Philadelphia, and by 1890 had moved to Dolgeville, New York. It’s most famous autoharp, the Model 73, is still made (in China, unfortunately) by the Oscar Schmidt company, who has made it since the early 1900s.

Nearing completion (finally) is my Chapter House Portative Organ. I’m now rubbing out and polishing all the parts, and just finished putting tung oil on the pipe surfaces. This project has been going on for more than a year (close to two years now), and I’m pretty excited to be on the home stretch. Photos coming soon.

Another long-running project (only 6 months or so), is a box trestle table. This is my design based on a German table from the 1600s. The legs and the top and bottom of the table are complete. I’m now carving the sides of the box in a style similar to the original. This WILL be done for the Santa Cruz Woodworkers Show at the Santa Cruz Museum of Art and History (MAH), which starts July 30th. 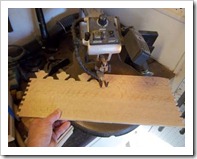 My newest project is another lighting fixture. This one is square, but made out of wood. It will have a similar design to the metal one I made at the Cabrillo College “Lighting and Warm Glass” extension class. The sides will be joined with box joints, and it will also have frosted (sandblasted) glass on the bottom and sides.

There are, of course, several instruments in process and others waiting to be started, and I’m still working on fixing and restoring antique zithers. I just finished one, and I have one more to do in February. The completed one is a Viennese concert zither by Franz Schonfeld, from around 1880-1900. It has Brazilian Rosewood on the front and back, and what looks like an Indian rosewood on the sides. It’s a pretty instrument with a warm, full tone.

Well, it’s another sunny day, and it’s time for me to get back to work. Rain is forecast this weekend, and it’s supposed to get chilly again. I’ll go out and make hay (or rather sawdust) while the sun shines. Onward…