It’s been a while since my last blog, and a lot has happened. First, there is only 9 days left for the Santa Cruz Woodworkers’ exhibit at the Santa Cruz Museum of Art & History, and tonight (November 4th) is the last First Friday event for the show. Now I’m feverishly trying to figure out where I’m going to put everything when I bring it home on the 14th.

Even though I’m running out of space in my house for my artwork, I've created quite a few new pieces since my last blog in August.

I recently completed my fifth “Dolgeville” autoharp. It’s another Model 2 3/4, similar to the one I sold at the American Craft Council Show in San Francisco. This is the first instrument that I used the black walnut cut from South Dakota logs given to me a few years ago by one of my wife’s co-workers. It has a lovely flamed pattern on the bookmatched front and back. For a little change from my first Model 2 3/4, I carved faces on the key guides. Another lovely sounding instrument. 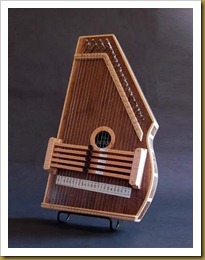 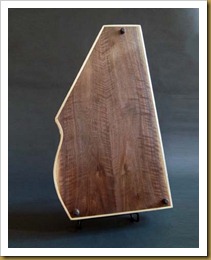 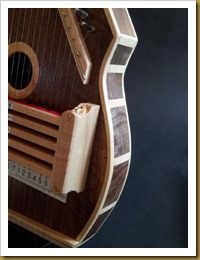 The second recently completed instrument is another black walnut hourglass Mountain dulcimer. This is “Molly Malone”, the Irish fishmonger selling “cockles and mussels, alive, alive-o”. The tuning pegs are hand-carved partially opening cockle shells. I think this one has incredible tone. 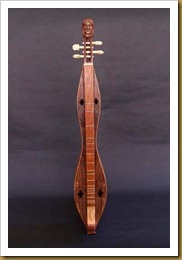 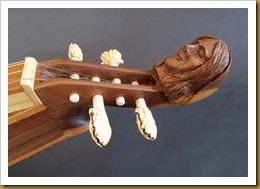 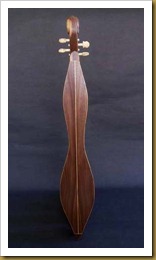 Continuing on my newer artistic path, I’ve finished several pieces since August. First is another white oak hand-carved medieval trestle stool, similar to the one I have in the Museum of Art & History Santa Cruz Woodworkers’ show. Second is a “cricket”, a small trestle stool used as a foot stool, made of cherry and purpleheart. 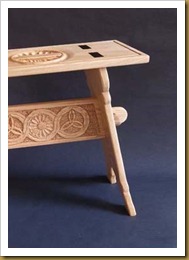 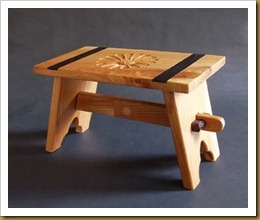 And now for something completely different…

Always one who likes to try something new, my most recently completed piece is a white oak rush-seat stool with hand-carved faces on the tops of the four legs. Unlike the designs of my other stools that have a connection to historical sources (paintings, Victoria & Albert Museum, etc.), my 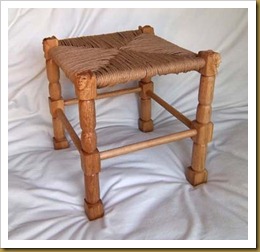 rush-seat stool is completely original. It has a medieval look to it, and it’s really the rush weaving that might be considered historically based, since that style of seat has been around for centuries.

All parts, legs and rails, were hand turned by me on my Jet mini lathe. Before assembling it, I carved the medieval-style faces on the top corner of each leg. I had to learn how to weave the rush seat, so I did a lot of research before attempting it. Even after finishing the weave, I noticed errors on the last four or five runs and had to re-do it. It’s actually very comfortable to sit on.

And something else completely different…

Pictures. Pictures? Yes. For an upcoming show at the Santa Cruz Art League called “Small Wonders” (no pieces larger than 14” square), I created some 10” x 10” frames with some of my hand-carved faces attached to them. Some faces are wood, some are tagua nut. 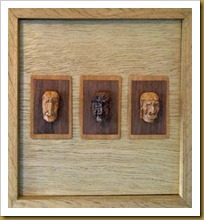 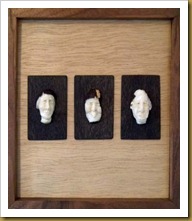 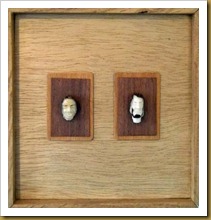 There are several more pieces on my workbenches at various stages of progress that I hope to have completed soon. Check back later this month.