Summer’s winding down. Here in Santa Cruz, the month of September, after Labor Day, and when the tourists leave, is the clearest and warmest month of the year. Today, it was very sunny and in the 80s, up until almost 7pm. Actually, all Summer wasn’t bad. Mornings were foggy, like usual, but it always seemed to burn off in the afternoon, leaving  each day pretty pleasant. Our tomatoes are actually ripening very well this year. 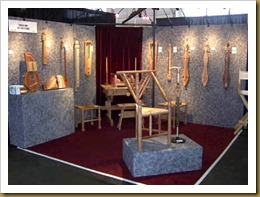 It was a busy Summer, and it’s still busy. In July, we decided to completely re-do and reconfigure my show booth for the San Francisco American Craft Council Show at Fort Mason (August 3-5). Stella repainted (sponge painted) all the panels and pedestals in greys instead of our outdated faded greens. Also, to set off the pedestal table and chess set in a pseudo-medieval setting, Stella made a blood-red velvet drapery to hang behind it. The whole effect was awesome.

The San Francisco American Craft Council Show was great. We had a wonderful time, made good sales, and I had some fantastic help all weekend with my good friend (for the last 48 years) Charlie.

Of course, the big news is the upcoming Santa Cruz County Open Studios Art Tour. I've been accepted for my 12th year in this exciting presentation of Santa Cruz talent. Look for me at location 206 on the calendar map. Remember that purchasing a calendar and getting out to the studios of the more remote artists is often one of the most rewarding Fall experiences you can have in Santa Cruz. Calendars can be purchased at many locations throughout Santa Cruz and neighboring counties and online through the new Open Studios Art Tour website . This year there is an app that may be purchased for smart phone and iPad users. I've already downloaded it - the app looks great and is easy to use. Oh, and by the way, my studio will be open from 11-5, October 13-14 (North County Weekend) and 20-21 (Encore Weekend).

Remember in my last blog entry that second dulcimer cane I was working on? It’s done! And, somehow I was able to make the fife in C, so it can be played along with the dulcimer (also tuned in C). My dulcimer canes have a short 24 inch string length and a sweet sound similar to a small epinette des Vosges.

At the American Craft Show in San Francisco last month, my first dulcimer cane got a lot of interest, and sold. You can see the new one during Open Studios.

On my workbench is another "original" instrument: a dulcimer chord zither. The design is based on a concert harp zither that was made in Mittenwalde, Germany, in the late 1800s. At that time Mittenwalde was in the forefront of stringed instrument building, especially zithers, and thousands were made

by a number of craftsmen. Many still exist in museums and collections.

My dulcimer chord zither is a Mountain dulcimer and will have 6 sets of chord strings. The top and back are bookmatched black walnut, and I tiled the sides in black walnut, maple, and ebony (all salvaged).  It's a big project and won't be quite done for Open Studios, but you will be able to see it in process.

Also on the workbench - actually on the lathe - are wood turnings for a second medieval three-legged chair. I'm making this one from salvaged black walnut, more of that wood I acquired from a barn in Hollister last year. Again, this chair is based on one in the Victoria and Albert Museum in London. (That’s a picture of it in my hand in the photo.)

I’ll have several turnings done, so you’ll be able to see this on display during Open Studios as a work in process. 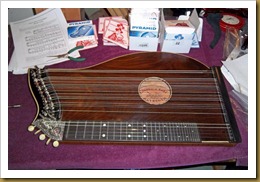 This has been a good year for me for instrument restoration and conservation. I've just finished restoring a Leonhard Zapf concert zither that was made around 1920 after World War I in Bayreuth. Bayreuth is in the middle of Germany, between Berlin and Munich, and close to the Czech Republic border. The zither strings I ordered from Germany came this week so I was able to complete the restoration. I'm now working on the repair log. (For major repairs, I always photograph the daily progress and provide a complimentary repair log.)

Nearing completion is a very interesting German-made autoharp from around 1885, Müller's Auto-Harp Erato. (Erato is the muse of lyric poetry.)

When it came to me it was dirty, the metal parts rusty, and the case was coming apart. I now have it together again, cleaned and polished, all metal parts shining, and ready to string up. I still have some work to do on the key cover, but it should be done right after Open Studios.

An interesting note about Müller Auto-Harps that I've come across in my research is that these were the first autoharps that were patented. Around 1880, Müller got a British patent for his instrument design. Around this same time, Zimmermann, a German immigrant living in Philadelphia, got a U.S. patent for the same design but didn't go into production until 1885. Some historians agree that Zimmermann copied Müller's design. Müller's company didn't last, but the Zimmermann autoharps became hugely popular in America. The same design is still produced today by the Oscar Schmidt Company, which acquired the Zimmermann patents in the 1920s. 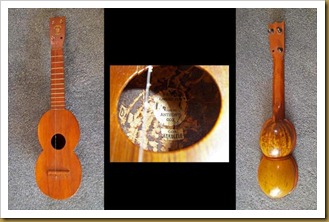 Once I get the zither and autoharp out of the way, I’ll start on a unique “Cocolele”, a ukulele made out of cocoanut shells by Anthony Cox, sometime in the 1930s. Quite a few were made and occasionally show up on auction web sites. This one has a few bad cracks in the top, but should be fairly easy to repair, once I pop the top off. The shells are fine.

After too many years with the same shades of green, we decided it was time to update our show booth with new colors and background to help show off my medieval furniture and instruments. Having a corner booth in the front half of the exhibit hall at the San Francisco American Craft Council Show last month made our mind up for us, and it turned out great. It was, to me, the best looking booth I've ever had. Many thanks to my wife for volunteering to paint all the panels and pedestals. (I've never liked to paint.) And, again, big thanks to my old friend Charlie, for helping me in San Francisco.

So, until next time, onward…

Oh, and don’t forget to get your Open Studios Calendar/Artist Guide and stop by my studio in October.