Welcome to My Workshop: A Detour

Ah. A beautiful weekend. It was warm and sunny and perfect for gardening… and making sawdust. Actually, making wood shavings for this artist’s wife to soak and dye yarn for small weavings and knitting. She’s received quite a bit of natural yarn from her cousin who raises sheep, which got her thinking about how old natural dying processes were used to color the yarn. So far, she’s used flower petals, onion skins, tea, and now walnut wood shavings, which gave her yarn a lovely light brown color.

That was a very short detour. A little longer detour is the one I’ve been taking in my artwork. As I’ve mentioned several times before, the Santa Cruz Woodworkers, which I’m I member of, will be exhibiting at the Santa Cruz Museum of Art and History, starting July 30th. I’ve finished all but one of the new pieces I’ll be displaying, so I’m kind of winding down from the 6-day-a-week grind I’ve maintained for so long. However, the winding down also kind of brought me down trying to overthink and work out the artistic direction I want to travel in the future. (More on that direction later.)

I’ve cut down on the number of craft shows and arts festivals this year to two, down from six a few years ago. Of course, the main reason for fewer shows is the problem with the economy. People stopped buying much art. Much of the jewelry and wearable art (mainly women’s clothing), continues to do well, but decorative art has not. Shows are expensive to do, so this year I’m only doing the local San Francisco American Craft Council Show at Fort Mason (August 12-14), and the very local (at home) Santa Cruz County Open Studios Art Tour.

As you probably know by now, if you’ve followed my blog for a while, I’ve been a luthier, a builder of stringed instruments, since 1972. I’ve made more than 300 instruments, from autoharps to zithers (Ok, autoharps are zithers too, but I needed the A-to-Z reference), with occasional detours to small keyboard instruments (pianoforte, portative organ). Since we found out,nearly two years ago, about our woodworking show being scheduled at the museum, I decided to add to my medieval-style instruments, with medieval-style furniture. That’s the longer detour. 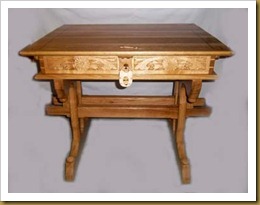 In past blogs, I’ve shown photos of my big medieval German box trestle table while I’ve been working on it. Well, it’s finally done!  (See photo!) I’m very pleased with the results. The carving is totally different from anything I’ve done before.  There are a few “faces” around, on the ends of the trestles and on the wooden padlock, but the entire box is relief carved in a floral pattern. Anyway, while researching this style of table, as well as benches and stools of that period, I got to thinking more and more about turning off of my luthier path and taking a detour to medieval furnishings. 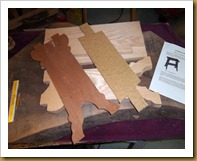 The small white oak trestle stool I completed last year for the museum show has been a big visual success, and I’ve been asked to make more, with not only oak, but walnut and maple, for future craft shows and possible inclusion in gallery and/or art catalog sales. To make layout and cutting of the four pieces that make up the stool, last week I created templates out of scrap 1/4” mahogany plywood. That way, each stool I make will be the same size and cut at the right 12° angle. 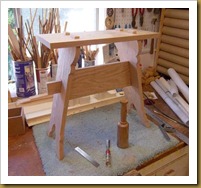 This week I started on a new oak stool. Using the templates, and setting my saws and drills at 12°, I was able to dry fit the stool in less than 8 hours of work. Of course the carving will take much longer, but I plan to have this completed for the August American Craft Council Show in San Francisco.

Last year I picked up a couple of books on medieval furniture. Most of the pieces described in the books are examples from museums and tourist castles in England. Some are simple, but elegant, stools and chests, and others are intricately carved beds, chairs, and cabinets. I’ve been studying several of them for future projects.

Back in February, I wrote about traveling to Hollister where I found a treasure trove of free wood. I filled up my Jeep and its lumber rack with a ton of walnut, maple, 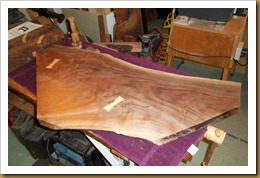 cherry, and several types of exotic woods. One grand piece of black walnut I got was 8 feet long, 2 to 3 feet wide, and a full 2 inches thick. With it I’m making a custom corner television and media stand for our bedroom. When I first laid eyes on this piece of wood, the first thing I thought about was making something in the George Nakashima style, using the natural shape of the wood in the design of the piece. (To see what I’m talking about, check out the late George Nakashima’s work, and new work carried on by his daughter at their website: www.nakashimawoodworker.com.) One thing George Nakashima was known for was inserting dovetail “keys” in the wood over cracks for checks. I did the same thing on my tv cabinet.

The legs and shelves are made from the cut off ends of the piece I’m using for the top. They’ll all be attached by mortises and tenons.

When I was using my old small 4” wide by 24” long jointer to plane down the surfaces of the black walnut legs for my Nakashima-style tv stand, the blade stopped turning after only two passes. Not only did it stopped turning, but I was getting an acrid 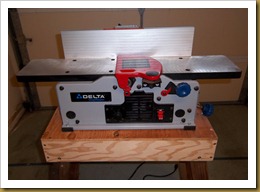 smell coming from the motor. Well, after 20 years of fairly heavy use, it died. The motor seized up and the windings burned. This was an inexpensive jointer at the time, and the company went out of business less than 5 years after I bought it. In other words, I found no way to get a new motor for it. Instead, I searched around for a new jointer, small enough to fit my little shop, but robust enough to plane hard woods with ease. After reading reviews of the three I picked out, I decided on the Delta Shopmaster. It’s a 6” wide by 30” long jointer with a three-speed motor. (Slow for very narrow pieces of wood, faster for wider pieces.) As soon as it came, I made a roll-around stand for it so I can roll it out when I use it, roll it out of the way when done. I used it right away on the four black walnut tv legs, and it completed the task without a problem.

Meanwhile, In the Studio… 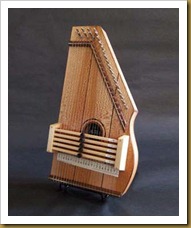 A few weeks ago I finished my fourth autoharp. This one is based on the 1885 Zimmermann Autoharp, Model 2 3/4. It’s a five-bar autoharp that plays in either the key of C or key of F. I made this one out of scrap lacewood (Australian silky oak), maple, and black walnut trim. Autoharps have a sound like no other zither-style instrument, and the sweet sound of this one can make you think about simpler times and the music that told stories and inspired generations of folk singers (including me).

Also on the workbench is another black walnut dulcimer. I call this one “Sweet Betsey From Pike”. (That’s the way “Betsey” is spelled in the song.) The sides are already steam bent and in the assembly form waiting for me to finish carving “Betsey”. I’m currently on my detour on the medieval furniture path, but the paths do converge once in a while, so I hope to also have Betsey finished for the San Francisco American Craft Council Show.

Once again, I’ve gotten a little verbose… but a lot is happening, and a lot is going on. The days are getting longer, and a little warmer. I cleaned the BBQ, and already used it this last weekend. Yum.

On another note: A reminder that this summer I can take a few “apprentices” (one at at time) in intense two-week independent studies on the art, history, and construction of early stringed instruments. Students will make either a medieval lyre or psaltery (which they can keep) after researching and drawing plans for the instrument. Some power tool use, but most will be with hand tools. Cost is $400 for 40 hours of instruction and supervision. For information, contact me at ron@roncookstudios.com, or call me at (831) 425-4933.