It’s been a while since my last blog. The year is rapidly coming to an end, so I thought it was time for an update.

After an extended “Indian Summer”, Winter finally arrived. However, the rains haven’t arrived yet, but the temperature, even here right next to the Monterey Bay, has been in the 20s and 30s at night. Yes, no rain. So far, 2013 has been California’s driest year on record. But, with the heater going in my studio, I’ve kept very busy with all my projects and teaching. 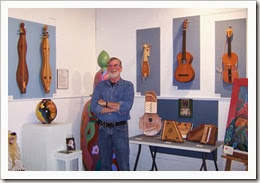 Since November I’ve been exhibiting at the Tannery in Stephanie Schriver’s Gallery and Studio. I’ll be there until December 20th. The Tannery is a complex of studios, plus live/work apartments, in the former Salz Tannery complex just a short distance from downtown Santa Cruz. Many of the historic old buildings have been renovated and divided into large and small studio spaces, offices, and a restaurant, and another historic building will soon be a new performing arts center. Stephanie’s Gallery and Studio is #122 and located at the Tannery Arts Center, 1050 River Street, Santa Cruz, CA. 95060. Come on by.

Last October was the annual juried Santa Cruz County Open Studios Art Tour. I was open one weekend this year, and it was successful for me. Art aficionados were out in force to visit me and the 250+ artists on the tour. For information on the recent Open Studios Art Tour, as well as other on other events, on arts education, and on grant information, go to the Arts Council Santa Cruz website.

At the Santa Cruz Art League a new show called “Small Wonders” will be opening December 14th and running until January 5th, 2014. Artwork on display is all 14 inches and smaller. Prices are usually smaller too. This is a great place to find an artistic craft piece, painting or photograph to give to that special someone this Christmas. The opening reception is on December 14th, 3-5pm. The Santa Cruz Art League is located 526 Broadway, Santa Cruz, CA 95060. 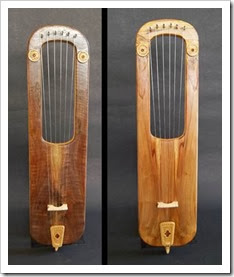 The two “mini” Saxon Rotes (lyres) that I created early this year (mentioned in the last Blog post) were both recently sold through my Etsy shop. Last month, I created two more. Both are carved out of beautiful flamed maple. The top of one is a lovely figured salvaged black walnut, and the top of the other is an equally lovely piece of spalted maple. The hand-carved medallions, bridges, tailpieces, and tailpiece holders are maple. These are now available through my Etsy shop.

Since Open Studios I also completed two more “mini” items. I made one more mini hog-nose psaltery and a small trapezoidal psaltery. Both have 15 steel strings, tuned to a 2-octave C-major scale. The hog-nose psaltery’s top and back are nicely figured pieces of black walnut. The frame is maple. The trapezoidal psaltery’s top and back are salvaged flamed white oak. The frame is also maple. This white oak is some more resawn from the top of a broken drop-leaf table I was given a few years ago. Both of these psalteries are available through my Etsy shop. Around July I came across plans for a medieval-style folding chair. The design for this chair actually goes back to ancient Egypt. Folding chairs were easy to carry along for travels and on campaigns. My design is based on examples dating from the late medieval to early renaissance periods. As usual, I added some of my facial carvings on the arms as well as floral carvings on the legs and frame. This was a challenge to get all the pieces positioned right, but I’m happy with the results. It folds up quite nicely. The perfect accessory for a Renaissance Fair or SCA gathering. 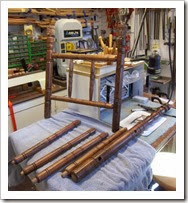 I’m finally gluing up the black walnut medieval 3-legged chair I’ve been working on for over a year. I recently had to re-turn one of the back pieces, because the one I did earlier this year had too many faults in the wood. I was dissatisfied with it, so I did another. Today the main part of the chair frame is all glued up. Now I have to turn 10 more spindles for the arm rests and diagonal back pieces.

Just to give you an update, the 3-legged chair is based on one that’s housed in the Victoria & Albert Museum in London. 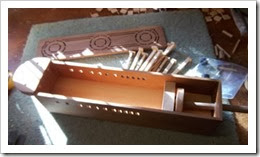 Once more I’ve started working on my next Symphony. No, I’m not composing a new concert piece. A Symphony is a small hurdy gurdy that was used, primarily by European monks, back in the 12th and 13th centuries. I’ve mentioned this instrument before, but to recap, I started maybe two years ago, on this, my second symphony based on one in the illustrations in the 13th Century Cantigas de Santa Maria illuminated manuscript. I’ve actually done more work in the last week than I’ve done in the last year. (Distracted by too many commissions, restorations, and shows.) I’m determined to finish this by the end of January. 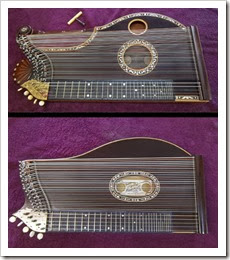 I’ve been extremely busy with my antique stringed instrument restoration business this year. Since July, I completed the restoration of not one, but two Franz Schwarzer zithers. One was an incredible 1889 harp-like concert zither, one of Schwarzer’s finest, with a lot of mother-of-pearl inlays and a fancy scrolled head, and the other was one of Schwarzer’s standard models, from 1908, also very beautiful with mother-of-pearl inlays around the sound hole.

On my workbench now are two very old ukuleles. The first is another Kumalae ukulele, 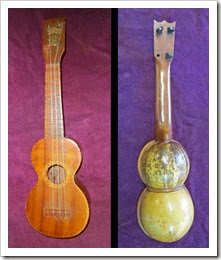 one of the older ones and with the original wooden friction tuning pegs. I believe this one is from around 1920-25 or so. This is the third Kumalae I’ve worked on. The second one is a Cox Koxolele. Where most ukuleles are all koa and made like tiny guitars, the Koxolele has a koa top, but the body is two joined cocoanut halves. From my research, it seems to be from the 1930s. Pretty unique.

Do you have a unique stringed instrument, one that’s been in your family, or one you picked up somewhere, that needs a little TLC and needs to be repaired or restored, contact me for a quote. I specialize in antique zithers (concert and chord), ukuleles, and some guitars and other stringed instruments. My e-mail is ron@roncookstudios.com.

As I mentioned in an earlier blog, I taught a two day extension course on woodcarving at Cabrillo College for the Spring Arts program.Since then I taught another for the Fall Arts program. I was happy to find out that both classes filled up. For last Spring and Fall I taught both hand and power carving. NEWS FLASH! I will be teaching at Cabrillo again for the next Spring Arts program, April 6 and 13, 2014. When the Spring Cabrillo College Extensions Catalog becomes available, you can check it out at http://www.cabrillo.edu/services/extension/. You can sign up for my class online.

That’s about it for now. Have a very Happy Holiday Season!