My favorite Christmas song, one that I hear in my head over and over, is the classic that used to appear on the newspaper comics page every December from the 1950’s to 1970s: “Deck Us All With Boston Charlie.” This humorous tune was sung by a group of swamp “critters” in the Walt Kelly comic strip, Pogo. For those not familiar with Pogo, it was an incredibly well-drawn, funny, and often topical and controversial strip. Like today’s Doonesbury, some newspapers refused to print the occasional daily strip that was deemed too critical or made fun of something or someone politically important. Walt Kelly’s artistic views of the Nixon administration (with Agnew as a Nazi-garbed hyena), was often omitted from some of the Republican-supporting newspapers of that time. But I digress…

To get into the Holiday spirit, check out the lyrics to “Deck Us All With Boston Charlie” at the Official Walt Kelly Pogo web site at http://www.pogopossum.com/deckus.htm.

Welcome To My Workshop

Even though I’ve only done a couple of shows this year, it’s been a very busy year, and continues to be very busy. I’ve had more zithers to restore this year than I’ve ever had. As soon as I finished two in October, two more arrived and one more is scheduled to come in January. If you have an antique or vintage stringed instrument that is a family heirloom or part of your collection that needs repair, restoration, or conservation, send me an e-mail with photos so I can determine how much work needs done, method of work, and cost of work. For unusual instruments or instruments by little known or unknown makers, I try to find as much history on them as possible, which I include in my complimentary logs. To read my logs on recent and past restorations and repairs, go to my web site at http://www.roncookstudios.com/RepairLogs.htm.

With a big Museum of Art and History (MAH) show on wood crafts by the Santa Cruz Woodworkers coming up next July, I’m preparing a medieval installation piece with not only my musical instruments, but furniture of the period. I’ve completed all but the largest piece. It will be an exciting show. My most recent accomplishment is a medieval trestle stool. It’s like a trestle table but on a small scale. I carve green men on both ends as well as Celtic knots and floral patterns. It’s all white oak with a little ebony accent on the tenons. 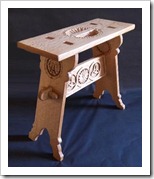 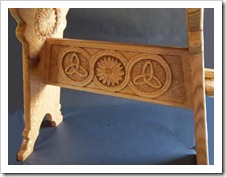 The last piece of furniture I’m making for the MAH show is a 14th-15th century box trestle table. It has a table top, with wooden hinges, that opens to reveal a shallow chest that, in olden times, was used for the silverware and platters, items considered very valuable to the household. The chest was always locked. I recently made an old-style padlock, completely out of wood, that will go on the hasp I’ve carved. As you can see in the photo on the left, the key slot is covered by a tagua nut carving that flips aside so the wooden key can unlock the padlock.

Other Works in Progress

It’s been nearly a year now, but my Chapter House Portative Organ is still coming along slowly but surely. (Don’t call me Shirley!) I finally finished carving the top part of the bellows unit, and carved a pump handle to go with it. I’ve got the pipes seated in their mounting holes better, and I’m working on the decorative carvings on the front and back pipe holders. I’m hoping also to have this ready for the MAH wood craft show. 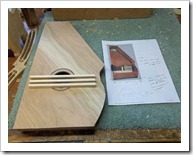 Earlier this year I completed my first Dolgeville-style autoharp. It’s based on the Zimmermann company’s 1890 model 73, the first 12-chord autoharp that’s still being made today (in China) by the Oscar Schmidt Company. I’m now working on the earliest Zimmermann design, the model 1, a simple 3-chord autoharp (C, F, G7) with only 21 strings. It’s coming along quite well, and I hope to have it done before the end of the year.

For new works next year, I’ve got plans (lots of plans) for several new and unusual instruments, furniture, and sculptural pieces. Most will be based on historic sources, but some will be original. Stay tuned.

Well, that’s it for now. It’s a cold rainy day, but I’ve got my heater going in the studio to make it comfortable for more carving and woodwork. Until next time, have a very Happy Holiday season, and sing a verse or two of “Deck Us All With Boston Charlie”!