Like  Jack Benny said when asked how old he was, I’m still 39—again. Another year’s gone by, and I’m thinking more and more about Grecian Formula. I’m also thinking a lot about (time to get serious, folks) my life, and how to complete everything that’s on my “do-before-I-croak” list.  Hm-m-m. I had an early mid-life crisis, maybe now I’m having an early later-life crisis.

Well, it is my birthday today. I missed being born on Halloween by almost six hours. (Thanks Mom.) I celebrated by getting up at my normal time, seeing my wife off to work, and carving/sanding  in my studio all day. (My wife is taking me out to dinner tonight. Yum!)

A lot is going on in my studio. I recently got a bed extension for my Jet Mini Lathe, so I can turn longer pieces. The reason I got it is that 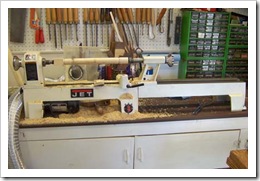 I’ve decided to make some medieval furniture to go along with my medieval instruments.  The first piece I’m working on is a medieval-era 3-legged stool. There’s several visual references to 3-legged stools in mid- to late-medieval and renaissance paintings. Remember, floors weren’t flat like today’s. In fact, many homes had dirt floors, or unevenly sawed planks, that a four-legged 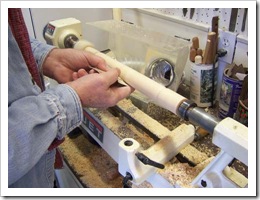 stool would rock on. Three legs mean the stool sits stable. I’ve already turned the legs and rails for one stool so  far. The wood is salvaged urban forest wood, poplar logs given to me over a year ago. They’re pretty dry, but turn easy like green wood. I sand them while the lathe is turning, and they turn out quite polished and ready for a finish.

I’m still working on a Mountain dulcimer (“White Lady”), Chapter House Portative Organ, and Starnina Harp. Off and on, in between 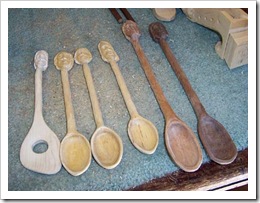 stints on the instruments, I work on spoons and spurtles. I finished two today, and four more to sand down tomorrow.

On the restoration and repair front, I’m working on a 1927 Kumalae “Royal Hawaiian” ukulele, and a Hawaiian guitar, a sort of inexpensive Weisenborn copy. I just started on the guitar, so 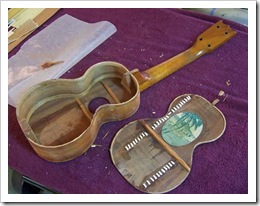 there’ll be more info on that later. On the uke, I still have to put a few “cleats” on the inside to the top to help strengthen the cracks, similar to the cleats on the back crack repairs in the photo.  After that, it will be time to glue everything back together and start working on matching the old finish.

That’s about it for now. We just got back from my birthday dinner at one of our favorite local restaurants. My grilled Alaskan salmon and pumpkin pie desert were fantastic.

Time change this weekend. Onward through the fog…

I’m exhausted! I spent most of last week getting ready for the first October weekend of the Santa Cruz County Open Studios Art Tour. This is my 9th year, and you’d think everything would be second nature to me and very easy to set up. I say “ha”!

When I got to arts or crafts festivals, I go with just enough exhibit panels and pieces to get by. For the Open Studios Art Tour, I set up everything I have: tour panels (11 of them), old peg board 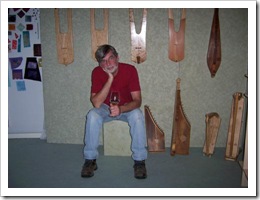 panels (from my first shows), and the canopy. Plus, I have to trim the hedges, weed, pressure wash walkways and patios, and generally clean everything inside and outside. Yes, as you can see from the picture, I’m exhausted.

Before I got too exhausted, earlier in the week things started off with a bang with the Open Studios reception at the Santa Cruz Art 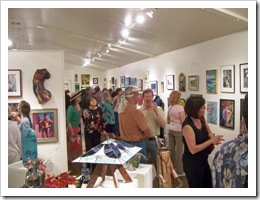 League. The Art League hosts the Open Studios preview exhibit where people can get an idea of what all the artists do, and which ones they might like to go see. The place was packed, pieces sold, and a good time was had by all.  There was food, wine, and good entertainment, as well as all the artwork. The next picture is me by my exhibit piece, the Epinette des Vosges I call “Philip and 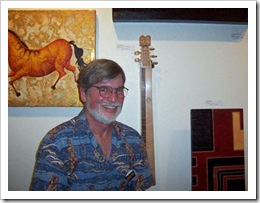 Clement in the Confessional”.

The first weekend of Open Studios was for the artists in North Santa Cruz County, which is the area north of the yacht harbor. We had around the same number of people come through on Sunday as we did last year, but Saturday was fairly light.  There was a lot going on around the county on Saturday, and I think some people might have had event overload. This Saturday and Sunday, October 10 and 11, is for the South County artists, and the following weekend, October 17 and 18, is the encore weekend, which is for all of us who signed up for it. This will be another chance for all of you who are in the area to stop in and see my art and studio.

Since I have two weeks between the Open Studios openings of my studio to the public, I’m working on another antique instrument

restoration project. (Can’t dirty up my work space until after Open Studios.) By the way, it’s not a zither this time. It’s a Kumalae Royal Hawaiian Ukulele.

This Kumalae uke is from around 1927-30 and was labeled and  sold at the big new pink Royal Hawaiian Hotel, which opened in 1927. It’s very similar to the Kumalae Style O model, but with three decorative rings around the soundhole instead of one. I believe this to be one of the first to be sold at the hotel, because the peg head still has the Kumalae Hawaii decal, and the label is oval with the Royal Hawaiian name and a picture of an 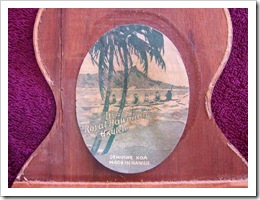 outrigger canoe riding a wave,  with Diamond Head in the background. Later Royal Hawaiian ukes had a Royal Hawaiian decal on the head and a round more colorful label inside. Also, when I removed the back and looked under the label, which was partly loose, I saw a round area of glue where another label once was, probably a Kumalae label.

There’s lots of cracks to repair, and, unfortunately, a lot of big  globs of glue to remove that someone spilled all over the sides to  try to “fix” the side cracks. This is the second Kumalae uke I’ve worked on, and the first had pretty much the same types of cracks in most of the same places. It’ll take time, but it will be beautiful and playable again.

Anyway, that’s what I’m up to at this time. Soon I’ll be repairing an old copy of a Weissenborn guitar and getting it in good playing shape. Then, after Open Studios, it’s back to work to try to get several more new instruments and sound sculptures ready for the KPFA Craft & Music Fair in San Francisco December 12th and 13th.

Next time, I might have some very interesting news regarding my future in arts and crafts. Stay tuned.