It’s hard to believe that nearly six years have gone by since I first started this blog. Here I am back again with all new episodes of “Welcome to My Workshop”. Stay tuned for exciting comedy, drama, adventure, and explosions of sawdust.

A few years ago, when the economy took a nosedive, I stopped traveling to and exhibiting at all the craft shows and art festivals that made up my yearly itinerary. I still go to the San Francisco American Craft Council Show (August 2-4 this year), mainly because it’s close, and I still take part in the Santa Cruz County Open Studios Art Tour the first three weekends in October. I thought dropping so many shows would leave me with too much time on my hands, but it’s just the reverse. I’m busier now with creating new pieces for shows, galleries, and Etsy, as well as restoring antique stringed instruments.

Around a month ago I decided to create some new versions of older instrument designs I developed over five years ago.

I started out with a wing psaltery, a medieval stringed instrument based on examples in illuminated manuscripts,

artwork, and sculptures dating back to the 1200s. It has a sycamore top, maple frame, black walnut back, bindings, and tail pin cover, and a hand-carved tagua nut figure. All woods except the maple frame are salvaged. There are 15 nylon strings tuned to a two-octave C-major scale. They produce a beautiful harp-like tone. It is 26 inched tall, 7 inches wide, and 2.5 inches deep. This psaltery is perfect for medieval and renaissance reenactments, playing early music, meditation, as artwork, or just for fun.

It is now available on my Etsy shop.

Even before the wing psaltery was half completed, I decided to take some of my wood scraps and create two more mini Saxon rotes (lyres). After 40 years of being a woodworker and luthier, I’ve accumulated bins of scrap woods, ranging in size from small 1 or 2 inch blocks to 3 foot long thin pieces left over from the tops and backs of instruments I’ve built.

The first rote is made from kwila and redwood. Kwila is a reddish-brown hard wood that grows in Australia, New Zealand, and Indonesia. It was given to me by a friend several years ago. The redwood is salvaged first-growth wood that came out of a Santa Cruz Victorian home that was being remodeled. The wood was about to go to the dump when a lady called me to ask if I wanted some of it. I rescued it from the construction site’s trash pile. It’s beautiful wood with wonderfully straight grain and was likely local grown, right here in Santa Cruz. The bridge and tailpiece are maple, and the two figures on the yoke are hand carved tagua nuts. (Tagua nuts come from a palm in Central and South America.) The tailpiece holder on the bottom is hand-carved black walnut. 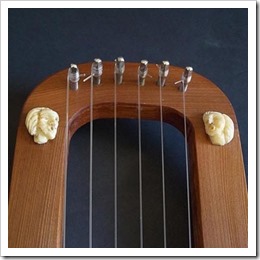 The second rote has a top made from two pieces of lovely, figured tiger (or flamed) maple. The back, bridge, tailpiece, and medallions are from scrap maple I had sitting around. The tailpiece holder on the bottom is hand-carved maple. 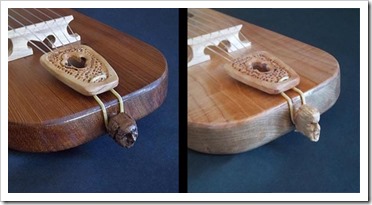 Each rote is 22 inches long, 6 inches wide, with a body 1 inch deep. They are hollow, and the six nylon strings produce a bright harp-like tone. As I’ve mentioned before, this style is based on 7th and 8th century examples found in burial mounds along the east coast of England. The tuning has been lost to history, so you can tune them any way you want. Very light and portable, they are perfect for renaissance fairs and reenactment gatherings, as artwork, or to just play and enjoy.

Both are available on my Etsy shop. 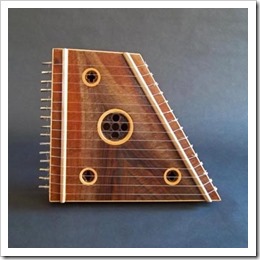 The third instrument I finished was another Cantigas de Santa Maria trapezoidal psaltery. I still have a couple left that I made several years ago, but I decided to start two more, one for me and one for my young student to carve and complete on his own (under my instruction). Like the wing psaltery, this one has 15 nylon strings tuned to a major scale that produce a harp-like tone. It is 13 inches wide, 11 inches tall, and 2.5 inches deep. Another very portable instrument, great for ren fairs, reenactments, early music, meditation, or to just play and enjoy. This one also comes with a canvas carrying bag.

With so much going on, I had to put a couple of long-term projects on hold. Now that I’ve completed several projects, it’s time to work on them again. 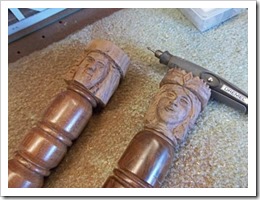 Back before Christmas last year I started working on a new, larger medieval 3-legged chair. I thought at the time it would only take a few months to complete. Well, 7 months later, I’m finally doing the head carvings that will be on top of the two front legs. Once these are done, I can dry fit the chair again and measure for the 10 back and side pieces I still have to turn.

Another project I started well over a year ago (maybe two years ago now) is my second symphony based on one in the illustrations in the 13th Century Cantigas de Santa Maria illuminated manuscript. This last week I began the laborious process of fret sawing the open design on the lid. I kept putting this off, because I knew it would take around 4 to 6 straight hours of delicate sawing. The image below shows around 3 hours worth of work, and I’m about half way done. 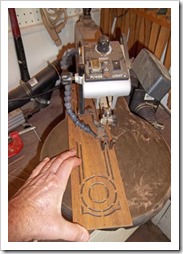 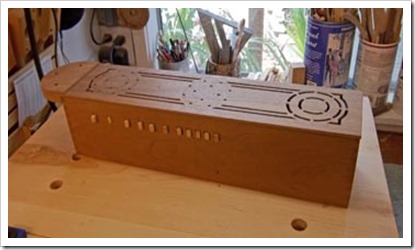 As I mentioned in an earlier blog, I taught a two day course on woodcarving at Cabrillo College. I might have another class for the Fall extension courses. (More news on that as it happens!) One student who attended my class wanted to learn more and is now attending one-on-one classes here at my studio. My younger student, who has now been coming for a year, has progressed nicely learning different styles of carving. His latest projects are a mallet carved relief of a green man, and making a musical instrument. The green man is around 80% done, and the instrument is in the beginning stages. 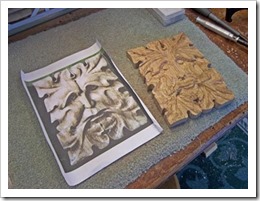 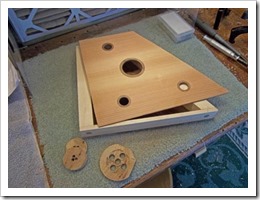 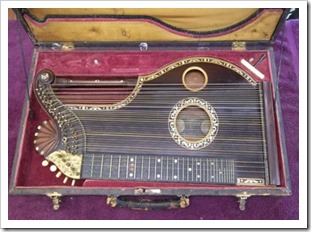 On my other workbench is a lovely 1901 Franz Schwarzer zither that I’m about to finish restoring. It had several cracks in the top and back that were caused by dry conditions that shrunk the wood. I’ve stabilized them and repaired other broken areas, like on the pin bridge. This is a beautiful instrument made in Washington, Missouri, around 1900.

If you have a stringed instrument that has been in your family, or one you purchased for your collection and needs some TLC to get it playable again, or to display, be sure to contact me at ron@roncookstudios.com.

That’s about it for now. To see more of my work, check out my web site at www.roncookstudios.com or my Etsy shop at https://www.etsy.com/shop/roncook.