Very Busy for a Short Month

For the shortest month of the year, a lot has transpired. Somehow, every day seemed full of work, exhibits, meetings, mini-vacation/anniversary, and, unfortunately, the small health problem that I mentioned in my last blog.

I’ve been incredibly busy carving new pieces and finishing two instruments that have been on the workbench way too long. The 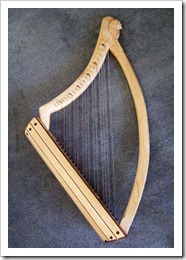 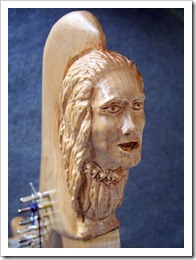 Starnina Harp, which I’ve been working on for over two years, is finally done. I’m happy to note that it looks and sounds wonderful. The  beautiful woman I carved as a figurehead doesn’t have a name yet, but we’re working on it.  Today I’m completing the display stand for it. Professional photos are coming next week.

The second completed instrument is “The White Lady” Mountain dulcimer. This has been a year in the making, because there always seemed to be other projects and exhibitions getting in the way. 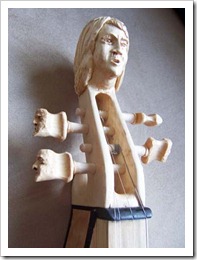 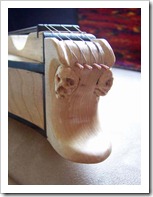 maple, with a spalted maple  fingerboard lamination over pine and with  salvaged ebony decorative features. The “White Lady” is a legend that pops up in several cultures and can refer to a beneficial angel or a harbinger of birth or death. My “White Lady” is patterned after the Irish Banshee, singing out (wailing) with  her captured souls (the tuning pegs). I’ve tuned the dulcimer to the Aeolian (minor) mode, and it sounds great when I play those wonderful old ballads, like “Three Ravens” and “Matty Groves”. Even contemporary ballads, like Richard and Mimi Fariña’s “Another Country.”

Meanwhile, back in the studio, there’s a lot more carving going on. There’s two more medieval stools in the works and well as a large number of chess pieces. There’s also the other long-term project I need to get back on: my portative organ. It’s been in the works now for over a year and a half.

A little over a week ago, my wife and I celebrated our 30th (we met on Valentine’s Day 30 years ago) by spending a couple of days in the West Marin County communities of Inverness, Point Reyes Station, Olema, and Bolinas. Actually, the reason we traveled up to those locations was to attend a Baulines Craft Guild meeting at the new board president’s home and studio in Inverness. There were three people at the meeting who gave very interesting presentations, including Katie Nartonis of Bonhams & Butterfields Auctions, who talked about the auction used as a source for selling contemporary crafts; Carol Sauvion, who was instrumental in putting the “Craft In America” series together and aired on PBS and talked about the series (and to meet the Baulines); and Tom Killion, who is an incredible woodcut-style print craftsman, and, hopefully, a future Baulines Craft Guild Master Member. He gave a talk about his materials and technique. The meeting was capped off with a tour of Bruce Mitchell’s studio and seeing his fantastic pieces and works in progress. A good time was had by all.

I’ll write up the next blog after I return from the Scottsdale Arts Festival sometime mid-March. I should have some nice photos to post of the show. Until then, onward… 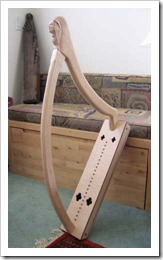 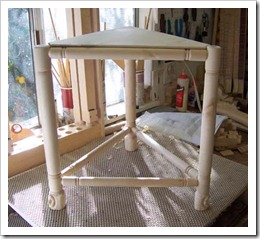 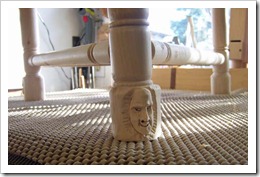