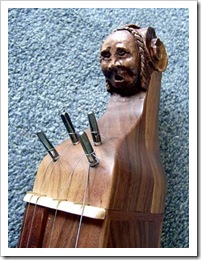 Quite a lot has happened over the last couple of weeks. My ex, who I hadn't seen for 10 years or more, called to say she was going to be at her parents for a few days and only about 45 minutes away. She wanted to get together for lunch and give me an instrument she found at an antique store. Also, she has an old Gibson J-45 that she felt needed new frets, so she brought that along too. We met at a Mexican restaurant that we used to frequent in the 1960s-1970s in San Juan Bautista. She brought her 90-year-old mother along. It was good seeing them both again.

My ex had no idea what the instrument was when she bought it. All the dealer told her was that she though it was Hungarian. As

soon as I saw it, I knew immediately that it was a Hungarian zither, an instrument that dates back several hundred years. It is incredibly weathered, looking as if it had been left outdoors for the last 75 years or so. It looks like weathered barn wood. It was probably found in a California gold rush town, since that's the area where my ex lives now with her family. It was simply made and the hand carving was elementary chip carving--no real design elements, just some edge fluting. The wear next to where it was strummed shows it was played a lot.

Traditionally, Hungarian zithers are backless. The back is open. Since these were usually played on a table top, the table would act 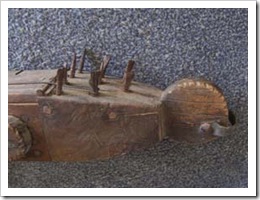 as a resonating surface. This one has 13 strings. Nine come off the main head piece, and two each on the two shorter side heads. Inside there is some faded writing that looks like a Hungarian name and possibly a date. I first thought it was kind of a stylized representation of 1928 or 1938, but on further examination, the numbers seem to represent something else. Also, the writing seems to be in faded ink and might have been written many years after it was made. There are nails used as bridges and some are used to hold the top to the sides. They are not old 19th century square  cut nails, but manufacture round wire nails. That means this would have been made after 1890, when round nails became more common.

The first thing I did with the old zither after I got it home was to measure it and create a technical drawing so I could reproduce the instrument one day.

Meanwhile, back in the shop...

I few weeks ago, my old Dremel rotary tool started to act up again. The flexible shaft began to get hot to the touch, which 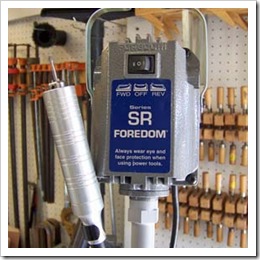 means the cable was unraveling and about ready to break. I've gone through several cable already, and the cost was getting to high to maintain the tool. I bit the bullet and ordered a larger, professional quality Foredom rotary carving tool. So far, it's proven itself to be a good heavy-duty carving machine. The first results are shown in the next picture. 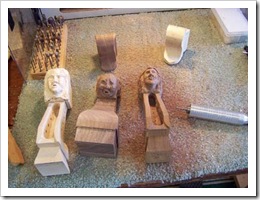 Two walnut heads and one maple. I've also carved out bowls on ten spoons. The Foredom has a foot pedal, so it makes it easier to regulate the carving speed.

There are three dulcimers and one Pennsylvania German-style scheitholt on my workbench right now, as well as the Chapter House Harp, that I've started working on again. More about those later.