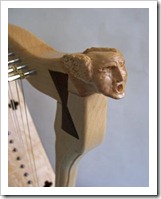 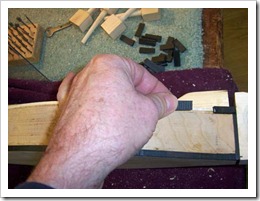 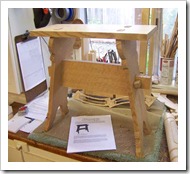 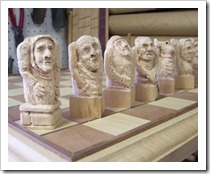 It’s been a while since my last blog entry, and my only excuse is that the Holidays snuck up on me. We took off to exhibit in San Francisco, then it was off to Santa Fe and Grand Canyon for a well-deserved 10-day Christmas vacation. Now I’m back, with new ideas, new projects, and resolutions. Happy New Year!

A long time ago (it seems), back around December 11- 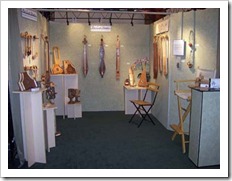 13, 2009, we went up to San Francisco and exhibited at the KPFA Craft &  Music Fair. This was my first time there, and it was a lot of work  for a two-day show. We did make a few sales, but, unfortunately, that weekend was a very wet one, with a huge Pacific storm dumping a lot of water and keeping many people away. 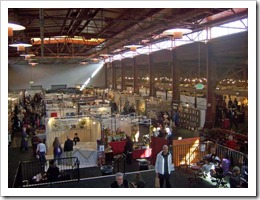 Fortunately, several of our old craft show buddies were also there, so we didn’t feel alone in a strange, new environment. (Exhibiting at a new venue is always stressful. Having friends around to give a little moral support helps relieve some of that stress.) 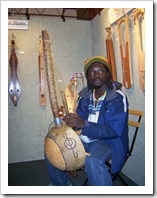 Several of our booth neighbors were very friendly, and we made some new friends, including a  fellow  from Burkina Faso who was helping out at a friend’s booth , who stopped by to show and play the African-style harp that he made. He played very well, and his instrument sounded wonderful. It made for a magical few moments out of three days of hard work.

For exhibiting in Galleries, December was a hoot! I send a piece, my Courting Dulcimer, to the international CraftForms 2009 show at the Wayne Art Gallery in Wayne, Pennsylvania, and two pieces, both birdhouse carvings, were accepted and delivered to the Santa Cruz Art League for the National Sculpture and Drawing Show. I’d been trying to get into the Wayne show for years. This year, my Courting Dulcimer was a hit, and they used it in some of their promotional literature. Fantastic!

Also, during December the woodworkers group I belong to, the Santa Cruz Woodworkers, got space in a new vacant building in downtown Santa Cruz to exhibit our work in window displays for 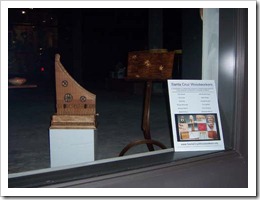 the Holiday season. The Rittenhouse Building is on Pacific  Avenue, the main drag, on a prime corner right next to the big Cinema 9 building, a couple of busy restaurants, and the two-story parking lot where most park for downtown enjoyments. I just found out after I got back from vacation that we are going to be there through January. It’s a great promotional opportunity for our group.

I barely got back to work in my studio when we had to pack up again and head for Santa Fe, New Mexico, for a beautiful 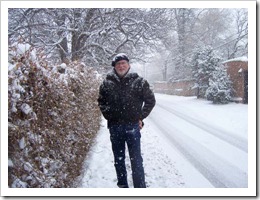 Southwest Christmas. We left on the Saturday after the KPFA show and drove for two days to get to Santa Fe. We shared a house with two friends who drove up from Phoenix. It was cold when we got there, and a couple of days later it snowed heavily. It was another magical time when we walked Canyon Road visiting galleries in the snow. Last year I had my first white Christmas while we were in Yosemite. This year, my second white Christmas (two in a row), was in New Mexico. Beautiful!

Just before we left, and on the spur of the moment, we decided to make a stop at the Grand Canyon. I checked online and found a room available at the Yavapai Lodge, which was 1/4 mile from  the south rim. More magical moments. The Canyon rim was covered with around a foot of snow, and the temperature was as low as it was in Santa 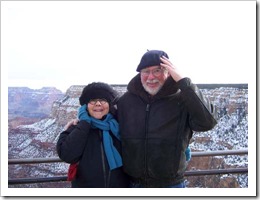 Fe (around 10 degrees or so). We had a wonderful dinner at the Bright Angel Lodge at a window table overlooking the canyon, then a fantastic breakfast at the old Fred Harvey built El Tovar, also at a window table overlooking the canyon. After breakfast, we hiked about a mile along the rim from El Tovar to Maricopa Point, where the wind-chill factor seemed like zero degrees. We stayed at the Grand Canyon until nearly 1 pm, when we knew it was time to leave and head home.

Back in the Studio

Well, we’re back now, and we rang in the New Year last night by drinking a glass of bubbly around 9:30 or so and going to bed before midnight. On New Year’s Eve day, I started gearing myself 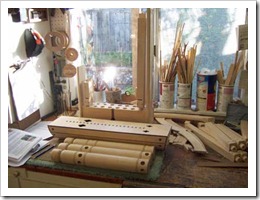 up for a New Year of projects, old and new. The old ones, which I’ve been working on for quite a while, are starting to take shape and look more complete. New ones, which I’ve been thinking ab0ut and planning for a few months, are beginning to take shape. My Starnina Harp,which had been in and out of process for over two years, is finally nearing completion, if I can ever finish the head 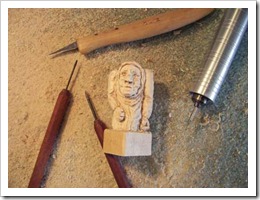 carving. The Portative Organ is kind of on hold, while I finish the  White Lady dulcimer and the three-legged stools. And today, I started on the first chess piece carving. I almost finished it in one day. It just needs a little clean-up and sanding. (Only 31 more to go.)

Anyway, after that much needed vacation in the Southwest snow country, I’m rested and ready to carve. Onward through the fog!