It’s been an interesting and busy week for me and Ron Cook Studios. The big news for our seaside community of Santa Cruz was the return of the Amgen Tour of California bike race. For the 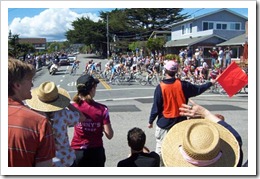 second year, Santa Cruz hosted the finish of the third stage. The  race route came down one of the streets a few blocks from me as it turned on West Cliff Drive heading to the Beach Boardwalk finish line. I took a little time off from work to watch Lance Armstrong, Levi Leipheimer, et al speed past us on a sharp turn by the ocean. Exciting race on a beautiful day.

My Mountain dulcimer commission, “Avery”, is in its final stage. I put on the last coat of tung oil Saturday and letting it cure a few days before applying the polish. It will be done this week before my wife and I head to the Sierras for a Memorial Day (and my wife’s birthday) weekend.

Another commission I’m getting started on is a series of five hand-carved boxwood spoons for a lady I met a couple of years ago at the Baltimore American Craft Council Show. She purchased a set of spoons for herself then, and after her 100+ year old 8-foot high  boxwood hedge fell during a fierce storm last winter, contacted me to ask  if boxwood would make good spoons. Boxwood, being a very dense wood that, in England, was used for woodwind instruments, is, of course, very good for strong spoons—and good for detailed carving. I’ve roughed out the spoons, but I need to let the wood dry a month or so before carving, since it’s still a little “green” (damp).

A couple of months ago I found a company back East that, among other things, manufactures acrylic covers for exhibits. They’ll make them as big or small as you need. I decided to try them out 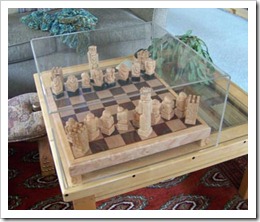 to make a cover for the chessboard and chess pieces I’m working on. It arrived finally and looks great. It will protect the board and pieces from dust, and it will deter people from moving the pieces (or pocketing them) when on display at shows or galleries. By the way, I’m finishing up carving the queens and have the bishops and knights all roughed out and ready for fine carving. It’ll be a few more months before they’re done, but they’re looking good.

Another “aside” from musical instruments: I’ve been working on some medieval furniture to display with the chess set and some of my medieval instruments, and just finished all the hand-cut 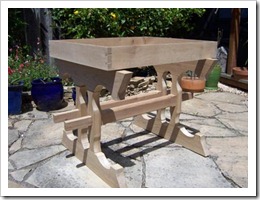 mortise and tenon joints for a box trestle table. For the first time, for me, I also hand cut dovetails for the box portion of the table. The picture shows the base and a portion of the top set up in a dry-fit test. White oak is a little hard to work with on my first dovetail attempt, since it splinters easily, but I was able to cut some nice tight-fitting joints.

On the antique/collectable instrument repair front, I’m just about ready to start restringing a 1909 Schwarzer concert zither I’ve been restoring this past month. It’s coming along nicely, and will be playable again when I’m done. Another customer should be sending her 1960-1970 family Mountain dulcimer to me soon for a fret re-fitting and “tune-up.”

I love working on old instruments (besides making new ones) and getting them to make music again. If you have an antique or vintage stringed instrument, whether a family heirloom or a newly purchased item, that’s in need of restoration or repair, contact me for a free estimate. (When contacting me, please include photo images of the instrument with close-ups of areas needing work.)

Well, May is starting to wind down, and my wife and I look forward to a little time off in the Sierras this next 3-day weekend.

May Started Off With A Crash!

May Day, May 1st, has been celebrated around the world many different ways. Ancient Romans had their Flora, celebrating the goddess of flowers; pre-Christian Germanic countries had their Walpurgis Night; Scotland had the Beltane Fire Festival, and Ireland had their similar Feast of Bealtaine. (Both countries burned huge bonfires in the evening of May 1st.) All these festivals celebrated the ending of winter and fertility and rebirth of spring. Several of these ancient versions of May Day also involved the traditional fertility rite of the May Pole dance. Similar, tamer versions are still around even in the United States.

Since the labor and Communist movements of the 20th century, May Day has become more and more a celebration known as International Workers Day or Labour Day. In Russia, during the Cold War, May Day celebrations included a huge parade in Red Square showing off their military might. Even the nature-based Bealtaine celebration in Ireland became a day of protest, often violent. And… that brings me to our Santa Cruz May Day riot.

Our little beach/college town had its own small gathering for workers’  rights and fair labor practices. However, a young militant group used the gathering as a rallying 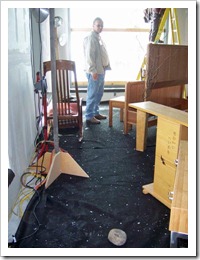 point for their “fight against the money-hungry, greedy businessmen”… etc., and began marching down our main street. A few began painting graffiti slogans on walls, then threw and broke bottles of paint on walls and windows, then threw rocks through the windows. A few more joined in, and when it was over, 15-20 buildings were damaged. Most businesses hit were local-family-owned stores, a couple that can barely afford to stay open. Some of the windows broken were  in the new and vacant Rittenhouse Building where the Santa Cruz Woodworkers (of which I’m a member) had our exhibits in the windows. Several of our wood pieces were damaged.  The picture is of the Rittenhouse building’s owner gazing at the rock that came through one of the windows and hit some of our art work.

Oh… enough of the downer news.

Meanwhile, back in the Studio…

For a few months now I’ve been working on a dulcimer commission. I’m happy to say that the carving is done and I’ve  been assembling the pieces. I’m at a point now where I’ll be doing several days of sanding before I can put the last pieces on and finish it up. It has cherry sides and a book-matched cherry back and a salvaged redwood top. “Avery” is looking good.

Last week I got another commission. It’s a smaller one, but it will be as fun to carve as “Avery” was. This commission is for five spoons made from boxwood my client sent from Maryland. Boxwood (Buxus sempervirens) , known also as common box or European box, is a shrub that has very dense white-to-yellow wood. It can grow like a tree up to around 25 feet high and have a trunk 8-10 inches in diameter. Old box hedges in England grew quite large 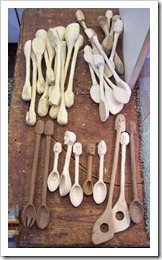 over 100+ years, but are becoming scarce as they’ve  been cut for development or for their wood. Box Hill, Surrey, in England is known for it’s stand of natural, wild box “trees”.  Box was brought to the United States  and can still be seen used as short hedges lining yards and walkways.

I’ve started roughing out the spoons and letting the wood dry a little (it’s still fairly green). The boxwood spoons are the upper left group in the photo. I’ve also roughed out quite a few regular spoons and spurtles. After last year’s shows, I nearly sold out all my spoon stock. Time to replenish. 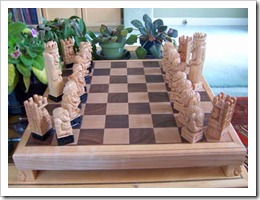 Another big carving project going on is my chess set. I just finished the rooks and the kings, and I’m now working on the queens. Only eight more to go after that.

Progress on the furniture pieces and portative organ has slowed down, at least until I finish my commissions. And in my front workshop, I’m still working on a zither restoration. It’s a small job, and I’m getting it done little by little. With everything I have to work on, I’m finding there’s just not enough hours in the day to do it all. My hands get sore and my eyes get hazy. (Age???)

Anyway… onward through the fog.