It used to be this time of year I would be well into show season, with the Baltimore American Craft Council Show in February and the Scottsdale Arts Festival in March. A few times, I’ve even spent time in the Baulines Craft Guild booth at the Contemporary Craft Market at San Francisco’s Fort Mason, sometimes the week before Scottsdale. More often it’s the same weekend as Scottsdale. Also, I’ve been cutting back on the number of shows I do each year, mainly due to the high costs and low returns (economic downturn). 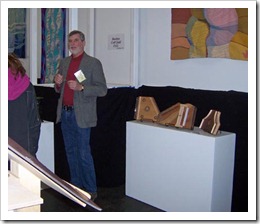 This year,I’ll only do the San Francisco American Craft Council Show in August, and our local Santa Cruz County Open Studios Art Tour in October. My main thrust now is in completing a couple of final new works for the upcoming Santa Cruz Woodworkers show at the Santa Cruz Museum of Art and History. So, last week, no Scottsdale, but I spent a day showing off and talking about four of my newer instrument creations in the Baulines booth at the Contemporary Craft Market. This is a fun two day show, smaller then the big American Craft Council event, and with a few of the same craftspeople there that show at both. There is a different “vibe” at this show then any I’ve been in, and the arts and crafts range from “barely acceptable” to “exceptional”. Most of the artists I’ve never heard of or seen before in my show journeys.

On the (Crowded) Workbench 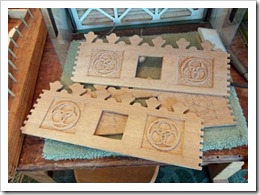 One of my exhibit pieces is a wooden medieval-style chandelier. I just finished the rough carving of all four sides, and will be doing the final carving and sanding in the next few weeks before assembling it. 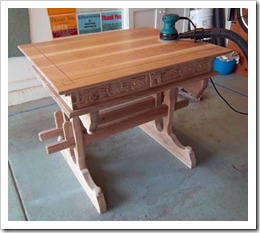 Nearing completion is my century box trestle table. This is based on a German museum piece that’s from the 1500s. I’m currently applying a finish of tung oil. It will take a few days more to cure, then I can complete the project with some paste wax. 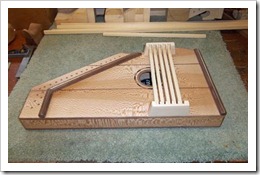 lasted only six years, and the styles and patents were picked up by the Oscar Schmidt Company, which still makes them today (in China). Oscar Schmidt continued to make the five-chord Model 2 3/4 up into the 1950s, and many ended up in elementary school music classes. (I just acquired one that was used at the Sacramento Elementary School District.) My new autoharp is a little unusual for me, because I laminated thin pieces of lacewood (Australian Silky Oak) over 1/8” mahogany plywood for the top and back. I usually make everything with solid wood, but the lacewood is very thin (under 1/16”) and needed the backing. I’ve just started putting the tung oil finish on, and the wood’s beautiful grain is really coming out. 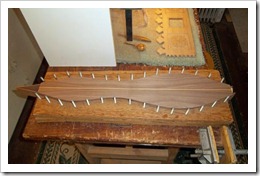 And, on the workbench across from the autoharp, is my next walnut dulcimer, called “Sweet Betsey From Pike.” Last week I steam bent the sides, and they’re now in the assembly form awaiting the head and tail piece. The female head carving is 1/2 finished. This is another gracefully thin hourglass dulcimer I base on the J. Edward Thomas dulcimer I saw at the Smithsonian Museum in Washington, D.C.

There are, of course, several more instruments and furnishing pieces scattered around my workshop. Cut out and ready to start on is my second Pennsylvania German-style scheitholdt, this one made out of poplar. Started several months ago, but awaiting more time and workbench space, is another symphony, an 11th-12th century box-shaped hurdy gurdy. Also cut out and ready to start on is a unique two-sided psaltery, another of my Cantigas de Santa Maria instruments. Nearly done are two sets of walnut candle holders. The bases and stems are turned and polished, but the tops still need to be carved.

Anyway, as pieces get completed, others are waiting in the wings to take center stage on my workbench. At least, without so many shows to do this year, I’m getting a lot of work done in my studio. So…

Onward through the fog… and wind… and rain. (This is the first day of Spring???)