A Lot of Carving, A Lot of Wood

Rain, sun, rain, sun, and now more rain. The first “official” month of Spring has been rather odd this year for the Monterey Bay area. We’ve had several very cold rain storms that left a little snow in the mountains here and in the Sierras, and some very nice warm weather that brought everyone out to the beaches. Last night, the rains started again. The big problem with rain is that the dampness can rust my power tools that have cast-iron tops, like my table saw. Usually, once a year in the Spring, I clean the tops and apply a couple of coats of paste wax. The wax not only protects the tops for the next year, but makes any sliding accessories (and wood) glide effortlessly through the blades or sanders.

But the rains don’t stop me from working, and a lot is going on in my studio and elsewhere.

This week a gallery show opened up in the Atrium Gallery at 600 Townsend, San Francisco. It’s the Baulines Craft Guild Spring Showcase, called On The Make. It was juried by Julie Muniz, Assistant Curator at the Oakland Museum of California. I was fortunate to have two pieces accepted, Pianoforte “London Bridge”, and Courting Dulcimer “The Tie That Binds”. One is on the 600 Townsend web site at http://www.600townsend.com/artexhibit.htm . The show runs from April 19th to June 10th. A reception is Thursday, April 22, from 5:30 to 7:30.

And… I still have a piece on exhibit at the Rittenhouse Building in downtown Santa Cruz.

Yes, I am doing a lot of carving right now. The next sixteen chess 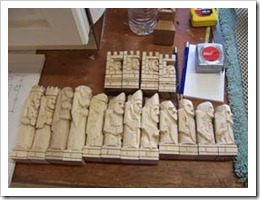 pieces are all roughed out and ready for the more tedious detail  carving. All the pawns are done and waiting for their leaders on my custom chess board. I’m really pleased how they’re turning out.

I have two stools in process right now. There’s another medieval 3-legged stool and a medieval trestle stool. Both of them will have carvings on them.

Spoons and spurtles have been so popular this last 6 to 8 months  that I sold out all I made last summer. A few weeks ago I roughed out twenty more. 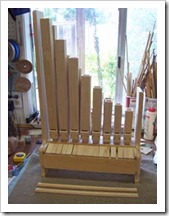 I’ve also revisited my Chapter House Portative Organ. I still need  to carve the pipe braces and a couple of decorative heads here  and there.

My big project right now is a commissioned Mountain dulcimer. The head carving is a highly detailed figure of the future owner’s son. I’m still working on the features, and it is getting to look more and more like the photos I use as a reference. I only work on it an hour or two at a time so I don’t over carve any of it. I strive to be as accurate as possible on a carved “portrait”. I keep checking the areas needing work and only work on that portion the next time I sit down to carve. When I carve heads that are from my imagination and not from photos, I’ll carve for hours until a character emerges from the wood. Those usually take around four or five hours to complete. Accurate portraits can take around eight to twelve hours, one or two hours at a time. At least the Mountain dulcimer body is all ready for assembly as soon as I finish carving the “portrait”.

A recent friend, who also works with my wife occasionally, lives on property in South Dakota. He had a black walnut tree that died and was cut down. He sent me two logs, around 24 inches long, that I ripped into boards last week. The wood has some beautiful figuring in it. I now have to let it dry for a year or two before being able to use it.

Earlier this year I went to my local lumber yard during their annual inventory reduction sale and picked up some nice white oak for the medieval furniture I’m working on. Beside working on the trestle stool, I’m getting ready to cut more oak for what’s known as a box trestle table. It’s a late Medieval or early Renaissance table (1400-1600) that has a storage box under the lid. It’s not a big table, but the box probably held plates and/or utensils for dining. Mine will be set up as more of a “pub” game table of that period.

Another commission is heading my way. Soon I should be receiving some boxwood from a customer I met when I exhibited at the American Craft Council Show in Baltimore a few years ago. I’ll be carving five spoons from her boxwood. Boxwood is a very hard, dense, yellow-to-cream-colored wood often used in the past for wind instruments, goblets, plates, and for decoration. The old box hedges in England had large trunks are not that plentiful anymore, and I understand some are even considered historical and can’t be cut for its wood. Most that are cut for their wood nowadays are newer hedges and relatively small, but large enough for spoon carvings. Boxwood purchased at lumberyards is usually from Turkey and other eastern Mediterranean countries. It’s not the same variety of boxwood as that in England and is much whiter in color.

Also, in for restoration is another Schwarzer zither. This one has 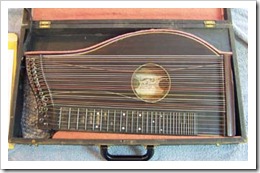 a  serial number, 9667, which shows it was made in 1909. It shows evidence that it was played a lot, and has a name scratched in the back that might be the first owner: Anna (or Ann A.) Eringer. It’s in pretty good shape, and really only need some cleaning, polishing, and new strings.

For now, I thinks that’s enough. Enough work, and enough rambling on…

Onward, through the fog… uh, rain.