The Return of “El Guapo”

Nearly six years ago I restored a beautiful large Amezcua classical guitar that came from Paracho, the premier guitar building center of Mexico. Like my California home town of Santa Cruz, there seems to be a luthier on every block. And like my home town, many Paracho guitars can look and sound exceptionally beautiful, but some are exceptionally bad.

El Guapo, as my client calls her Amezcua guitar, is one of the really beautiful and well-made guitars. It came to me in 2006 with the head broken off (see picture), and it took quite a while to fix it. When I finished, it came out like new. As with all major repairs and restorations that I do, I photograph all the processes and put together logs that I give my customers when I receive final payment. To see the log for my 2006 repair of this Amezcua guitar, and photos of the finished product with its beautiful inlays, click the following link:

Well, unfortunately, El Guapo had an accident recently. A fall cracked the head, right where I repaired it. Even though it’s a clean crack, I’ll still have to remove the head to fix it, which means the lamination and inlay will surely have to be redone. Like I did before, I’ll photograph the process and add an “addendum” to the 2006 repair log. Hopefully, this shouldn’t take too long, and I’ll be starting on it as soon as I finish up one other repair. 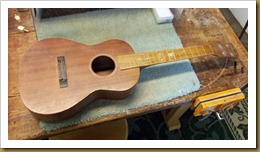 And that other repair is an old baritone ukulele. It’s probably from the 1950’s, or even early 1960’s, evidenced by the “Hilo” brand sticker on the peg head. It might have been made in Japan, but I’m not sure since I couldn’t find any relevant information on it.  It is very thin koa and looks like it was played quite a bit. There are many scratches and a gouge on the tail end. One back brace is missing, and the bridge has been modified, probably to change string spacing. With a little TLC, it should be a lovely sounding instrument.

Meanwhile, work continues on the last major piece I’m making for my part of the Santa Cruz Woodworkers exhibit at the Santa Cruz Museum of Art & History (MAH), July 30 through November 13, 2011. I 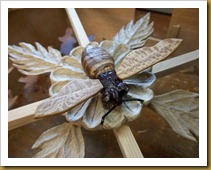 still have a couple of small pieces to finish, but they’ll take very little time to do. This large piece is my medieval-style chandelier. It’s all white oak, and I’ve carved the sides and also carved flowers, leaves, and a large bee for the bottom. The sides and bottom will have sandblasted-looking glass, and inside will be electric lighting made to look like candles. I just started applying the tung oil finish, and it should be done in another week or so. It’s been a lot of work, but kind of exciting doing something other than musical instruments for a change.

By the way, here’s the advertisement for our woodworking exhibit that will appear in the Summer issue of American Style Magazine: 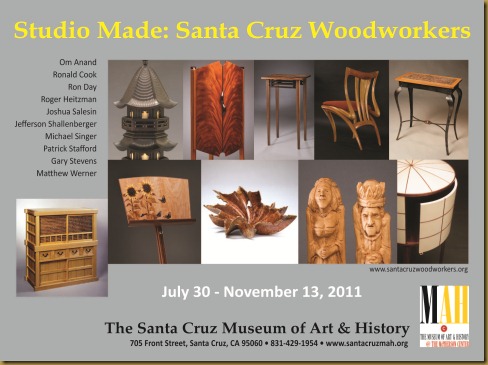 As for other work, I need to finish carving the head for my next black walnut dulcimer. This one will be called Molly Malone. I also have parts cut out and ready to carve for another Pennsylvania German schietholdt, a symphony, and a double-sided harp psaltery, another instrument based on the Cantigas de Santa Maria illuminated manuscript. Little by little, everything will get done in the next three or four months.

And now for something completely different…

We’ve been thinking about removing our large tv from the living room so we can use the space for “regular” furniture. So the plan is to put the tv in our bedroom corner on a custom television 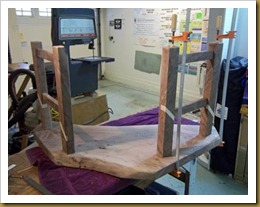 stand/cabinet. Some of the free wood I acquired in Hollister several months ago included a large, 8-foot-long slab of black walnut. It was a full 2-inches thick and up to 30 inches wide in sections, and included some bark (and remnants of wood-boring critters). When I first looked at that slab, I immediately thought of the work of George Nakashima. My tv stand design is based on those wonderful desks and tables designed and built by Nakashima. I’m taking my time on it, and it’s turning out pretty nice. Stay tuned.

Until next time, onward through the fog…-