After a record-breaking hot spell, I was able to get back into my shop for longer periods of time again and get a lot of work done. The temperatures got up into the high 90’s, which is pretty unusual for us, being only 1/2 block from the Monterey Bay. My shop got even hotter so I was only able to work early in the day. By mid-afternoon, the interior was 98 degrees. Now the fog is back and the temperature’s dropped to a cool 55-60 degrees—typical for this time of year.

On the workbench are two instruments that are coming along pretty well: a small medieval-style harp, and another Memling- 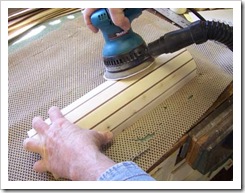 style hog-nose psaltery. I have other projects I need to get back to/continue on, such as two more dulcimers, the larger Chapter House harp, and also the Chapter House portative organ. (So many projects, so little time!)

The top picture shows me sanding the “coopered” staves of the small harp’s body. Shortly after the sanding, I laid out the string spacing and drilled the soundboard for the string pins. 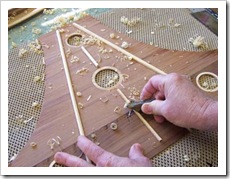 The next picture shows me using a small violin maker’s hand plane to shape the hog-nose psaltery’s soundboard bracing.

The last picture is my carving work area with some of the hog-nose psaltery rosettes in the process of being carved. Next to them are two dulcimer heads nearing completion. 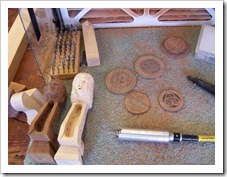 On the restoration/repair front: I’m now working on two concert zither restorations simultaneously. I try to work an hour or two in the morning on these before I head to the studio. I have a work table set up in my garage workshop just for my restoration work. My repair schedule for the rest of the year is now full-to-overflowing with work. And… I better get going!