Time is just flying by! It’s hard to believe that it has been over three months since my last blog. And here I thought I’d be updating this thing every two or three weeks. Well, one reason for my blog tardiness is that I’ve been very busy, and I’ve made more sales. This is good!

First:  I’m almost done with the major restoration of the 1885 Müller's Auto-Harp Erato. (I wrote about this instrument in my last blog, so you can see photos there.)The last item to work on, a decal to put on the key cover to replace another person’s botched job, has taken a lot longer than anticipated. The new decal is drying (sprayed with a clear finish), and should be ready to put on in a day or two. 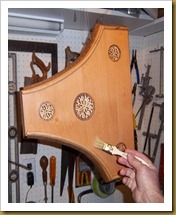 Second: Since my last blog I received a commission to build a custom “Memling” hog-nose psaltery, and I’ve been cranking on this trying to get it done by the end of the year. It’s close. Today I put on the third of 5 coats of tung oil varnish, with the last planned to go on Christmas Eve. Then after Christmas, I’ll polish it, string it up and send it to its owner. I’m very pleased with how it’s turned out. The rosettes resemble the tracery of stained glass windows. 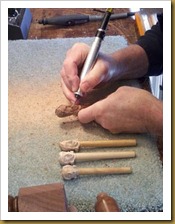 Third: My Etsy shop (http://www.etsy.com/shop/roncook) has been doing quite well. The noters are very popular, and back in November I carved more to replenish the depleted inventory. By December 15th, I had finished eight new ones and added them to my store.

Fourth: Another job I’m hoping to complete by the end of the year,  is one I introduced in my last blog, the Dulcimer Chord-Zither. To recap, the design is based on a

concert harp zither that was made in Mittenwalde, Germany, in the late 1800s. My dulcimer chord zither is a Mountain dulcimer but with 6 sets of chord strings. The top and back are bookmatched black walnut, and I tiled the sides in black walnut, maple, and ebony (all salvaged).

I’m currently stringing up the chords. As I do this, I will also lay out and drill the nut for guide pins, and notch the tail block so the strings are properly grouped. 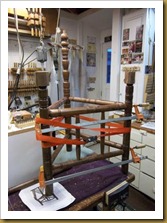 And finally, my crowded workbench just got more crowded. My second medieval three-legged chair is coming along nicely. I finished turning the rungs a few weeks ago, and just last week drilled the legs to fit the rungs. The photo shows the main parts put together in a “dry” fitting, which means I put it together without glue to make sure everything goes together the way it should.

Next is to measure and turn the back pieces and the arm rests. That’s 11 more turnings! That will take another month or so.

And on another note:

I did take some time off in November and took a trip to Sacramento to visit an old friend. After a couple of day there, he and I drove off to Yosemite for three days of hiking, catching up on old times, and enjoying the spectacular scenery. 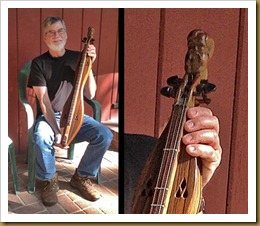 While in Sacramento, I was reintroduced to one of my earliest carved dulcimers, one I made around 1976 and gave to my friend. It’s a traditional 3-string hourglass dulcimer I called “The Mountain Man.” It’s made of beautiful, nicely figured Brazilian rosewood. As most people know, Brazilian rosewood today is scarce and illegal to import into the U.S. But back in the early 1970s, it was readily available at every hardwood lumber dealer. At that time I purchased enough for three or four dulcimers, which I made from 1975 to 1978. The Mountain Man was the second I made of rosewood, and, I think it was the fourth dulcimer of my luthier beginnings.

At Yosemite, I like to stay at the old Victorian hotel down at the south end of the park, close to the 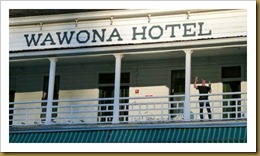 Mariposa Big Trees area. The Wawona is a beautiful structure that makes you sometimes feel like you are living in the horse-and-buggy days. The rooms are small, and the bath is down the hall (actually, outside and down the hall), but it’s comfortable and charming. The dining room is old fashioned. and the food is good, abundant, and filling. 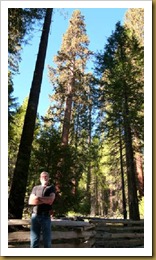 The first picture is me waving from the balcony in front of my room. The next picture is me thinking about wood. (What could I do with all that lovely Sequoia redwood?)

Well, onward. Time to finish up a couple of projects, then it will be time to write a few resolutions and goals for 2013.

To everyone, have a wonderful Holiday Season and a great 2013!