The Times (and The Seasons) They Are A’Changin’

Fall back. Another time change, and cooler, wetter days ahead. The warm, typical  October “Indian Summer” days in Santa Cruz, and much of California, are but a pleasant memory.

One of my favorite memories of October was going to Yosemite for four days. I headed to the Park two days after finishing Open Studios. I was dire need to relax a little and recharge my batteries. Open Studios took a lot out of me this year, what with all the set up, talking with hundreds of people over two 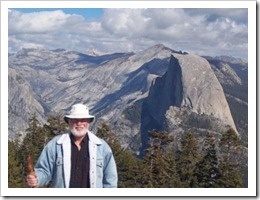 weekends, and tearing down. It was three weeks of very intense work. Yosemite was beautiful. The first few days I was there it was in the 70’s and 80’s. Very pleasant for long hikes, and for just sitting around reading and writing. I went by myself this time, and, as always, stayed at the Wawona Hotel at the south end of the Park. I hiked around 18-20 miles while I was there. My longest hike was a 9-mile round trip to Chilnualna Falls. It was warm and fabulous. Many trees had the red and yellow leaves of Fall. My second day’s hike was a four-mile loop in the Valley. Another warm day. My third day’s hike was up on the cliffs overlooking the Valley. It was a 5-mile round trip to Taft Point, then over to Sentinel Dome (see picture). The weather was starting to change, but the cooler, cloudier day was still spectacular on top of the dome with the panoramic view of the entire Valley and beyond. 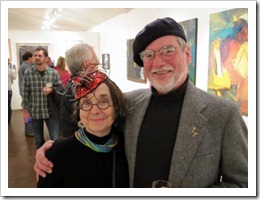 Halloween was pretty quiet for us. Our neighborhood has few children in it, and we barely had 10 or 12 trick-or-treaters stop by. On Saturday night, we did go to a Halloween-themed reception at the Santa Cruz Art League and had a wonderful time. The juried show, “Go Figure!” National Figurative Exhibit, running from Oct. 23 to Nov. 21, 2010, is a very exciting exhibition with paintings and sculptures from around the country. At the reception, a good time was had by all. By the way, Saturday, October 30th, was my birthday. We were singing the Beatles song, “When I’m 64,” over and over again. (“Will you still need me, will you still feed me, when I’m 64.”)

It took me a couple of days after coming home from Yosemite to get back into the swing of things. But when I finally made it back into the Studio, I completed two zither restorations, a commission, and a new dulcimer. I’ve been doing a lot of carving and a lot of sanding.

I’ve mentioned the zither restorations in earlier blogs, but barely touched on my last commission. A 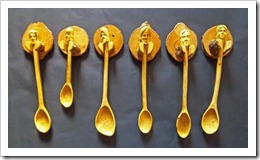 Maryland customer sent me a large box of cut pieces of English boxwood earlier this year. It all came from her 8-foot-tall 100+ year-old boxwood hedge that fell down during a big storm last winter. She had some of the best wood cut and sent me a bunch of it to carve into spoons and holders. I met her in Baltimore at the American Craft Council Show a couple of years ago. The boxwood she sent is good, dense wood that carves very well and sands to an incredibly smooth finish.

The dulcimer I just finished is another instrument made from the white oak wood salvaged from an old, broken drop-leaf table that was given to me by a couple of our Art League friends. I previously made from the same wood two Cantigas de Santa Maria trapazoidal psalteries and a small epinette des Vosges. Originally, the table was not much to look at, but once I cut into the wood, a beautiful flamed pattern appeared. It really shows up nicely on my new dulcimer, “The Dryad”.

Ok. What’s a Dryad you ask? Here’s the Wikipedia definition:

Dryads are tree nymphs in Greek mythology. In Greek drys signifies 'oak,' from an Indo-European root *derew(o)- 'tree' or 'wood'. Thus dryads are specifically the nymphs of oak trees, though the term has come to be used for all tree nymphs in general. 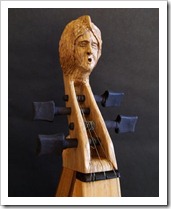 My Dryad is, as I mentioned, white oak. She also has an ebony bridge and nut. The binding and sound holes are black walnut. The fingerboard is pine with a maple fretboard lamination. The hand-carved tuning pegs are black-stained (ebonized) maple. Scale length is 28 inches. The size is 36” long and 3” deep. The upper bout is 4.5”, waist is 3", and lower bout is 6”. The style of my hourglass dulcimers are based on the shape of J. Edward Thomas dulcimers from the late 1800s to around 1930 that are housed in the Smithsonian Museum and The Boston Museum of Fine Arts. J. Edward Thomas is considered to be the first person to make and sell dulcimers as a living. He wheeled his wheelbarrow around the Kentucky hills and hollers selling his work for around three dollars. It’s rumored he made 1500 instruments during his life.

No sooner did I finish restoring two concert zithers, another one showed up on my door step. Then, another! Well, the second one isn’t a concert zither, it’s actually an old chord zither. It has six chords, four strings each (24 chord strings), and another 22 chromatically tuned harp strings. Not much to do on it, just a change of strings and a polishing. The concert zither, with 31 strings, is from around the turn of the 20th century and needs a little TLC to get it working again.

I’m back to working on some medieval furniture I’m making for the Museum of Art and History exhibit next July. I’m working on the box part of the box trestle 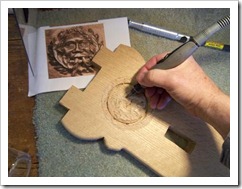 table now. The stand, with carved trestles, is done. Now I need to finish the hinged lid, prepare to attach the sides to the base, and then do a lot of carving on the sides. I’ll also be making a wooden padlock to lock the lid closed. Box trestle tables were fairly common in Germany during the late Medieval and early Renaissance periods. They obviously contained the family silverware and platters, so they could be locked and kept away from the “help” and curious visitors. Also in the works, and back on the carving bench, is a trestle stool. I’ve started carving several floral and geometric patterns, and I’m now working on two green man figures, one on the outside of each leg. Both the box trestle table and trestle stool are made of white oak.

I’ve got a new toy. I bought a small stationary belt and disk sander for my studio. I already have a very large belt and disk sander in my garage shop, but I needed a small one for sanding small parts that are too dangerous to work with on the big sander. It’s lighter and movable, so I can put it out of the way when not in use, or if I need more room while working or carving on a larger piece.

Well, it’s November, and the holidays will be upon us, and gone, before we know it. During this time, November 29th through March 17th, I’ll be exhibiting six pieces in the Baulines Craft Guild Master Annual Show, at the Marin Community Foundation Offices, 5 Hamilton Landing, Novato, California. I’m proud to say that my student will also have two pieces in the show. The reception will be Thursday, January 13th, from 4:30 to 7:30.

That’s it for now. Onward…