For California, this “rainy season” has been the driest on record. Here in Santa Cruz, right next to the Monterey Bay (1/2 block from my studio), we’ve had barely an inch of rain in three months and temperatures have often been in the sunny 70s. Hopefully that will soon change. We need the water.

On the plus side, I’ve been able to do a lot of work in my studio, including applying finishes that dry in hours instead of days. (Wet weather slows drying time.) I’ve been able to complete new pieces and restorations in less time than normal during this Winter. 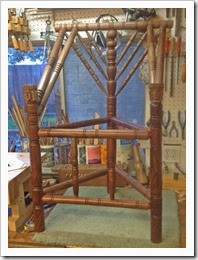 It’s been a long time coming, but my second medieval-style 3-legged chair is almost done. Since January 1, I finished all the spindle turning, drilled all the angled holes, and glued the whole thing together. All I have left to do is weave the rush seat, which is usually a two-day job.

To recap, my 3-legged chair is based on one in the Victoria & Albert Museum in London. The original was English oak, which darkened with age and use so it looks more like black walnut then oak. Since I had quite a bit of salvaged black walnut, I decided to use that for this chair. Other then my head carvings on the front legs, this one looks almost identical to the original. The turnings and wood color are very similar. 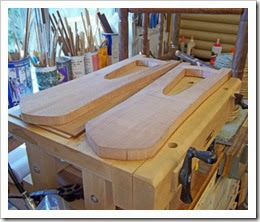 In my last blog I showed two new “mini” Saxon rotes (lyres). I decided last week to make a couple of “mini” Germanic rotes. Like the Saxon rotes, these Germanic ones are smaller versions of the full-sized lyres I often show at crafts shows and Open Studios. The small Saxon lyres have been popular on my Etsy shop, and when I finish the Germanic ones, I’ll put them on Etsy too. 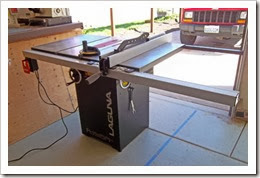 Back in December, my old Craftsman table saw stopped working. Bearings went out in the arbor and the saw blade started wobbling dangerously. Getting new parts was not only expensive, but would take quite a few hours to repair. So, I started doing some research on new saws and decided on a Laguna hybrid. This is like the larger cabinet saws, but built more for small shops. This new model is wired for 110, which is good since I don’t have 220 in my shop. It has a dust port on the side that I hook up to my portable dust collection system, and the motor is quiet and powerful. I’ve used it quite a bit already, and I have no complaints. It’s a well-made hybrid table saw. And… it was on sale! 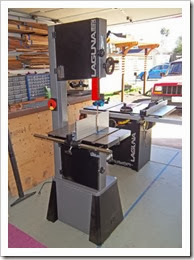 I also have a Craftsman 12-inch band saw that I’ve been using for the last 20 years, resawing all the woods I’ve used in my instruments and furniture. Resaw capacity was a short 6 inches, so I wasn’t able to cut anything thicker. This saw was also getting a little old and cranky, and my resawing was taking much longer to accomplish. The motor kept straining too hard and sometimes would even stop in the middle of work—even with a new blade.

Well, again, Laguna was rated pretty high, and like the table saw, it was on sale too. I ordered it on January 2nd, but since it was on back order, I just got it last week. This is a new 14 inch model, also wired for 110, that has a 13 inch resaw capacity. And it came with a very good and tall resaw fence. I got a 3/4 inch, 3tpi (teeth per inch) Timberwolf blade for resawing, and it worked great with my first resawn pieces of wood. It cut through 8 inch wide cherry and mahogany like it was butter. And the motor is incredibly quiet! I’m very happy with it. 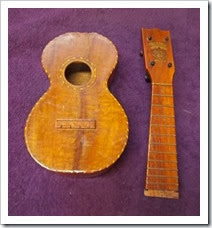 The work keeps coming. Since the first week in January, I’ve been working on two antique instruments. One I just finished is another Kumalae ukulele from around 1920. It is the same model as one I restored back in December, with the same type of fancy “rope” binding, and lovely figured koa wood.

This one was definitely more of a challenge, because the neck had broken off from the body. It had the appearance that someone might have sat on it. On the body, where the neck broke off, the wood was cracked and torn and some pieces were missing. The top was warped and several glue joints around the body had failed, leaving warped openings.

But I love a challenge. I disassembled, repaired, reassembled, and refinished it in around 6 weeks. It now looks like nothing ever happened to it. 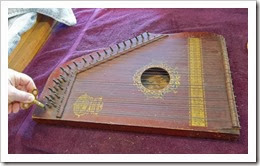 Also on my restoration workbench is a Schmidt and Menzenhauer Niagara Special model chord zither from around 1900-1910. Like many zithers I’ve restored, this one was also coming apart and the tail pin block was curling up from the string tension. It was pretty dirty, and the old strings and tuning pins were all rusty. (The photo is a before shot.)

I removed the back to be able to repair and strengthen all the internal bracing, and it’s now back together, clean, and I’m putting the finishing touches on it. I hope to string it up next week.

Do you have a unique stringed instrument, one that’s been in your family, or one you picked up somewhere, that needs a little TLC and needs to be repaired or restored, contact me for a quote. I specialize in antique zithers (concert and chord), ukuleles, dulcimers, and some guitars and other stringed instruments. My e-mail is ron@roncookstudios.com.

I will be teaching at Cabrillo again for the next Spring Arts program, April 6 and 13, 2014. The Spring Cabrillo College Extensions Catalog is now available. You can check it out at http://www.cabrillo.edu/services/extension/.

As of this writing, my class is full. However, there’s a possibility I may be teaching a week-long wood carving course this Summer. Stay tuned!

As I look out the window, I see a few clouds drifting my way. Starting tomorrow, it is supposed to rain for the next five days. Hopefully, we’ll get enough rain to put a little water in the reservoirs.