The New & The Old

The official start of Summer is only a few days away. Tourists are already arriving to our shores, and the warm weather will be here off and on for the next three months. Santa Cruz weather, like San Francisco’s, is ruled by the ocean. Fog comes in, not “on little cat feet”, but with the wings of seagulls and pelicans. Our shores are exciting to walk along, with whales, porpoise, otters, and, of course, the sea birds, as well as the ocean and shoreline: unpredictable and ever changing. 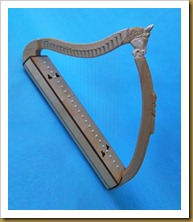 Last week I completed a new harp. This one is a smaller, 22 string, clarsach, which is an Irish-style, wire-strung harp. With wire strings, the tone is very bright and rings out when played. The body is coopered, similar to how wine barrels are made, and made out of maple with black walnut trim. The top, arm, and post are maple. On the post I carved a full-length figure of a woman, and where the post and arm connect I carved a horse head. I call this harp “Legends”. This relates to the Irish legends of the Banshee (the woman who came for the dying), and the Pooka (the horse or colt that may be regarded as being either menacing or beneficent depending the area of the legend). 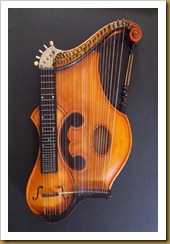 zither, which I finally finished around June 1st. I’ve never come across any of this shape and complexity before. There is no label or maker’s mark, no stamped or penciled serial numbers or any markings of any kind. In its case there’s a name and town ink-stamped in it: Julius Pettersch, Musiklehrer, Fehértemplom. Musiklehrer is German for music teacher or music master. Fehértemplom was founded in 1717 when it was part of the Habsburg monarchy. For the next 250 years it was ruled by the Ottoman a short while, then it was part of the Hungarian Empire, Austria-Hungary, then Yugoslavia, and now Serbia. The town is close to the Romanian border. The area has a large mix of languages. It’s primarily German, followed by Serbian, Romanian, and Hungarian. (Geography lesson for today!)

This concert zither was actually a conservation project, since it’s going to be on exhibit in a music museum in Southern California. This was one of the most difficult repair logs I’ve encountered so far.

There are three types of work I do on antique stringed instruments: restoration, repair, and conservation. A restored instrument is one “repaired” with all authentic woods and parts that are identical or similar to the original. It can be tuned up and played. A repaired instrument is one that non-traditional woods or parts are used to make it look like the original and to make it playable. Often, on very old instruments, the woods or parts are no longer available, so you have to

make do with newer woods or parts. A conserved instrument cannot be played. It is “repaired” to look presentable for exhibition.

A restoration project that came my way in April was another Kumalae Ukulele, this one from around 1920-25. Like many from this era, glue joints were failing, top and sides had cracks, and the body was slightly warped, due to loose interior bracing. I removed the top, which made it easier to repair all the bracing and cracks. I finished it last week, and it turned out quite nice. Like other old ukuleles with very thin woods, this one sounded wonderful.

In my last blog entry I showed my new dulcimer-cane. Well, I have another in the works. This time it’s walnut and maple with a soundboard of salvaged first-growth Douglas fir. What will make this one different from my first one is the removable fife section below the dulcimer part, which is more in tune (no pun intended) to the 19th century French original.

I got a new tool. Last week I spent three days at the annual AAW (American Association of Woodturners) Symposium. I attended several panel discussions and classes, viewed nearly a thousand hand-turned and hand-carved wood art pieces, and wandered the vendor show floor. It was in this last area I found an attachment for one of my Foredom handpieces that will allow me to do larger power-carved artworks. It’s also very good for hollowing out some instruments and spoons. 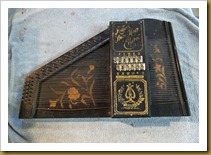 I got another restoration project this week. A circa 1900 German-made autoharp. This device has 12 sliding chord bars that allow 36 different chords to be played. It’s in pretty bad shape and will be another extensive project, but I’m sure it will look like new when I’m done. More on that later.

Lastly, be sure to check you my Etsy store! Here’s the link: http://www.etsy.com/shop/roncook?ref=si_shop&view_type=gallery.

Until next time, and as the Summer fog drifts around our home, onward…