Who Knows Where the Time Goes…

It’s hard to believe that it’s been over three months since my last blog. Time goes fast when you’re… quite busy. So, here at the end of the first quarter of 2013, this is what’s been going on:

The most recent big and exciting event was that I taught a two day course on the fundamentals of wood carving at Cabrillo College during the Cabrillo Extension Spring Arts sessions.

I’ve been teaching one-on-one for over a year now at my studio, but this was my first time teaching a group in a classroom. I prepared by writing a couple of presentations and cutting several types of woods for carving. I was nervous, not about teaching, but if anyone would actually sign up for the class and if I could make the class worthwhile for them. The class filled, and there was even a wait-list. Anyway, after weeks of preparation, the time came and I had a great time, and so did my students! 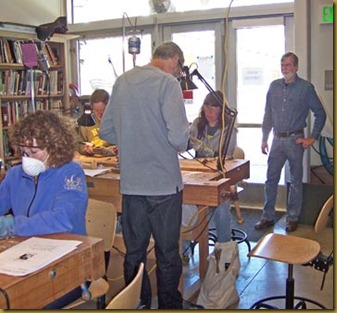 Back in December, several weeks before Christmas, the Baulines Craft Guild, of which I’m a member, was able to open a “pop-up” gallery at the Corte Madera Town Center, in Marin County, 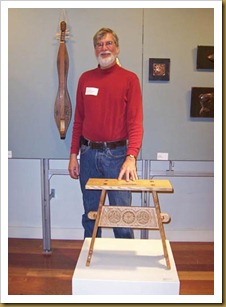 north of San Francisco, for their 40th anniversary show. It was to last until January 2nd, but the Town Center enjoyed having us there and asked if we’d like to stay another month. Of course we said yes, and were able to extend our exhibit. I spent several days “booth sitting” and had a great time talking to customers—and other Baulines members.

Less than a month after exhibiting in Corte Madera, the Baulines Craft Guild displayed in a large booth space close to the entrance of the Contemporary Crafts Market, which was in the Festival Pavilion at Fort Mason, San Francisco. I’ve done this with the Baulines for several years, and this turned out to be one of the most successful for several of us exhibiting. Below is a photo of my section of the booth, and the other is a photo of some of my happy customers. 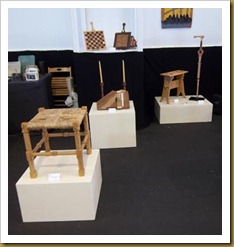 This is where I’ve really been busy. For over a year now my restoration and repair services have been going gung-ho. Even though it’s slowed down my own instrument and furniture carving and building, the chance to make antique instruments play again and furniture useful again is incredibly rewarding. It’s a “feel-good” job, and I gotta do it! 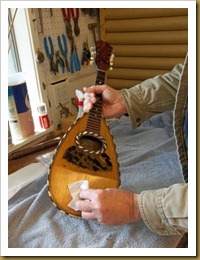 Last year it was mostly antique zithers on my workbench. So far this year, it’s been not only zithers, but a mandolin and two chairs. The mandolin, made around 1890, is a lute-style instrument, often called a Neopolitan mandolin. This one was made in Napoli, and the label reads Fabricante di Instrumenti Armonici, Napoli, Anno 1890. Its owners called this their “exploding mandolin” because they heard it “pop” when the top cracked one hot day. The crack, running the length of the top from the neck to tail piece, also made the inlayed pickguard come loose, and a piece of the decorative soundhole binding came out when it popped. Not hard to fix, but because of the thin woods, I had to be careful how I handled it on my workbench.

New this year to me is weaving rush seats on old chairs. A couple of years ago I learned how to weave rush for my medieval stools and chairs. An Open Studios customer visited a friend and asked him if he knew of anyone who could weave new seats for

her “carriage” chair, which is a shaker-style ladder-back chair (bottom right photo). He directed her to me, and I ended up doing two chairs. The second was a small children’s ladder-back chair (bottom left photo). On the larger one, I wove the seat with natural rush (made from cattails). On the children’s one I used smaller-diameter fiber rush, which is a paper product, but very strong. When done, I finished the natural rush with boiled linseed oil and the fiber rush with amber shellac. These finishes help strengthen the rush and help them last much longer than uncoated rush. If you have any rush bottom seats that you need recovered, please contact me. 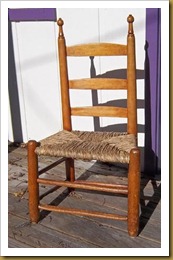 Of course, zithers abound. I seem to get inquiries about old zithers more and more all the time, and several more customers recently decided to have me restore their instruments. Last year was mainly concert (fretted) zithers. So far this year, it’s chord and plucked zithers.

One I just completed and shipped last week was a lovely Menzenhauer and Schmidt “guitar” zither. Many of this style of American-made zithers were called Guitar zithers, which is a misnomer because they are not fretted like a guitar (or concert zither). A lot of these instruments were sold by door-to-door 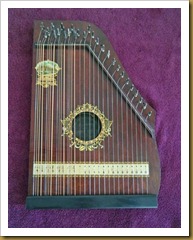 salesmen who could demonstrate how easy they were to play. However, most were sold through Sears and Montgomery Ward catalogs from the late 1800s through the 1920s. A few still remained in their catalogs into the 1960s.

Two instruments recently came to me from Pennsylvania: a small 17-string psaltery-style plucked zither and a much larger “Columbia” zither, model 3 1/2. Both were made by the Phonoharp Company. Phonoharp started in Berwick and Portland, Maine, around 1892. By 1897 they had moved to a larger manufacturing facility in Boston. Of the two zithers, the smaller one, called a Harp Celest (bottom left photo), is probably the older and made in Maine. The Model 3 1/2 Columbia Special (bottom right photo) was made later, 1897-1900, in Boston.

The Harp Celest needs the most work. The top and back are both cracked and several glue joints are failing. I already took the back off to repair the frame and cracks and noticed it had been in water or stored in a damp area. Water stains were evident inside at the tail end. The large crack

under the soundhole is from shrinking by getting damp and then quickly drying out. The larger Columbia zither has one back crack, and glue joints at the tail piece are a little loose. The top is in good shape, but the finish is crackled in what is often called alligator skin. I’ve taken care of most of the crackle by rubbing it with denatured alcohol, which reactivated the shellac-type varnish so it spread out filling the crackle voids.

My Etsy shop continues to grow. The most popular items have been the dulcimer noters. I’ve sold several and decided I’d better stock up a little and recently made five more. Other new items I’ve added to my shop is the Purpleheart Ukulele, and two rebecs (Quasimodo and The Golem),

To see more of my work, check out my Etsy shop at www.etsy.com/shop/roncook. 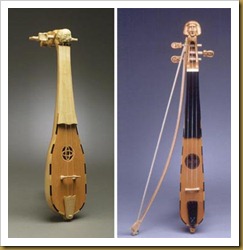 Well, that’s about it for now. I’ve been kept busy with teaching and restorations, and I’m still working on a couple of new pieces, such as another medieval-style three-legged chair and a hurdy gurdy. For our home, I’m getting ready to build another bookcase and another bedside stand. So, I should stop right here and get back to making sawdust.