It sits looking
over harbor and city
on silent haunches
and then moves on.

Well, the cat’s been here nearly every morning for the month of July, sometimes moving on for an hour in the afternoon, but often not. Analogies aside, it’s been a darn foggy month. 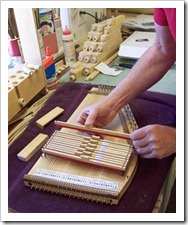 Last month one day I was gazing through some of my older plans and drawings and came across the very first plan offered by the Guild of American Luthiers, and one that I purchased from them  more than twenty years ago. The plan is of an early 20th century Oscar Schmidt 12-chord autoharp that was based on the 1895-1899 Model 73 by Zimmermann Autoharps of Dolgeville, New York. I always intended to build one, but was intimidated at the time by the complexity of the piece. Several years ago I built an autoharp kit and got to know the instrument inside and out, but then put the idea of making one from scratch out of my mind… until now. I spent hours researching the history and construction of the autoharp and located suppliers for all the various parts. Today it will be done. It’s all strung up and tuned. All that’s left is to trim the thick felt on the chord bars so they can actually play chords. When it’s finished, I’ll record a sound clip for my web site (www.roncookstudios.com).

as “in bad shape, good for parts”. Well, no one was bidding on it, and I thought I could use it  as for not only parts, but to study. I bid $8.00 and got it. I was extremely surprised when it came and found it to be in pretty good shape. There were no cracks, all the seams were intact, and all the decals and labels were in place. In fact, the decorative decal on the soundboard is the first one used—an ornate picture of a gryphon. It can be easily restored. The only things missing were a few strings and nine of the buttons on the chord bars. Needless to say, I’m excited about getting this historical instrument, the very first manufactured 12-chord Model 73 autoharp. It is virtually identical to the Oscar Schmidt Model 73 still being made today.

There’s a lot more work going on at my work bench, and it mostly involves carving. As you can see 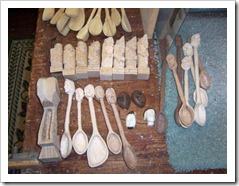 in the photo, my chess pieces are coming along fine. The bishops are nearly done and the knights are roughed out. After over a year of hard work, the chess board and pieces are almost done. Also on my bench are a lot of spoons. After the number of sales last year, my stock got pretty depleted. Just a few weeks ago, I realized I had very few “smaller” items for the American Craft Council Show in San Francisco. I’ve finished 12, and I have around 12 more to complete in the next two weeks. For the spoons, I also needed spoon racks. I had a few in stock already, but I made four more for all the new spoons.

Other items still in process: Portative organ (finally got good bellows leather and ready to finish the bellows), box trestle table (ready to carve), trestle stool (carving in process), and I recently started on another Mountain dulcimer, made almost entirely from salvaged white oak. Stay tuned! 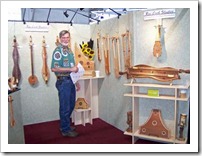 The Davenport Gallery show, “Wood is Good”, ends August 1st. If you missed the show, you can still see my work in San Francisco at the American Craft Council Show. The Santa Cruz Woodworkers exhibit in the Rittenhouse Building is still going on. I’ll be removing a couple of my pieces to take to the SF show, but I’ll replace them with something else. (Don’t know what yet.) If you’re in downtown Santa Cruz, either at the movies, bookstores, or restaurants, take a look in the Rittenhouse Building windows and enjoy the work of the Santa Cruz Woodworkers.

Onward through the… cat feet?

Onward Through the Fog…

It’s that time of year again. California’s valleys are getting hot, and our beach town on the Monterey Bay gets all the natural air conditioning known as fog. It’s like this every year, and we can’t wait for late Summer and early fall when the sun comes out and warms us up again.

For me, working in my studio helps to chase the fog away… at least in my head. (An evening glass of wine helps too.) The carving continues, and I’m down to the last eight pieces for my 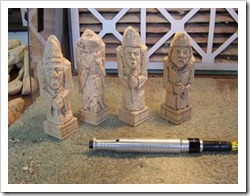 custom medieval chess board. The Bishops are starting to look pretty “Bishopy”, and each one has acquired a personality. The knights are roughed out and are not yet to that point. I’m hoping to have the whole set finished by the Open Studios Art Tour in October. Be sure to stop by to see me and all my new work. The dates my studio’s open are October 9, 10, 16, 17.

I purchased working drawings of a 1930s Oscar Schmidt Model 73 12-chord autoharp many years ago planning to someday build it. This particular Model 73 is the same design and size as the original Zimmermann instrument created around 1895 in 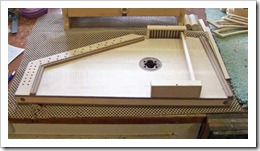 Dolgeville, New York. (Oscar Schmidt took over production several years after Zimmermann closed down in 1899.) Recently, I finally started on it. I’m calling it the Dolgeville Model 73, after the original. To help in my research, I found on ebay one of the Zimmermann originals. It was being sold as an “autoharp for parts” and sounded like it was in very bad shape. However, when it arrived (I got it for a song), it was in decent shape with all the labels and decals intact. I will restore it to its former glory. My new autoharp is nearly complete. I just need to get springs for the chord bars delivered. (I ordered them the other day.)

Well, time to venture out into the fog again. Stay tuned…