The first month of 2009 is speeding by and is almost over. In the last few weeks I was able to finish three of the instruments that I started after Open Studios last October. With guests, holidays, traveling, and the big business and web site change from Coog Instruments to Ron Cook Studios, I felt guilty for not spending enough time in the studio. I just have to keep telling myself that there's not enough hours in the day to do everything. Plus, I have to stop to smell the roses once in a while--and sleep. 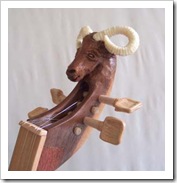 I've shown little bits of some of my new works, and now you can see the finished pieces. My newest pride is called "The Black Sheep". It's the third of my banjo-dulcimers. Like the others, this  one is almost 100% salvaged and recycled wood. The neck is laminated lacewood and zebrawood, more woods from a

local spear gun maker (for diving sport fishermen), with a maple fingerboard (the only new wood). The rim is mahogany, cut from an old patio table. The back is olive, poplar, and maple. The olive came from a tree cut down to make way for a  new house across the street from us. The poplar was from logs given to me by a friend. The maple was scrap. The top is 125+ year old Douglas fir, salvaged from a Portland, Oregon, warehouse that was torn down. The body is larger than the previous banjo-dulcimers and has a much deeper tone. It's very easy and fun to play.

My other two pieces are nearly identical. They are the second and third of my Cantigas Psaltery series. The surface wood is all 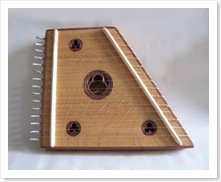 recycled white oak, like the first one, that came from an  old broken drop-leaf table some friends gave me. Bindings are purpleheart, on one, and black walnut on the other. These small psalteries have 15 nylon strings (two diatonic octaves) and have a pleasant harp-like tone.

I've returned to the carving of my Chapter House Harp. I've been working on this off and on for the last few years. Originally, I was carving not only a face, but braids and decorations all the way down the harp's post. It got a little overwhelming, and I put it away for a while. Recently I re-thought the design and came up with a lovely and more traditional look. It's going to be a spectacular piece. More on that later.

I'm also working on another test piece for my Chapter House Portative Organ. I'm trying a different key and wind chest design, and I thing this one will work much better than the first. More on that later too.

In March I'll be heading for Scottsdale, Arizona, for the Scottsdale Arts Festival. It's held in the Civic Plaza Park area March 2o-22. It occurs during baseball's spring training and is one block from the Giants training field. If you're there for the baseball, or if you're vacationing, or if you live there, come on by and see the great arts and crafts at the Festival. My booth number will be available soon.

Once again, for now, onward through the fog.

The last year went by so fast it was a blur. We're two weeks into 2009, and I'm already in a panic that I won't have enough done for the Scottsdale Arts Festival in March. I'm also in a panic over the number of old, antique zithers needing restoration that have somehow stacked up in my office. My yearly repair/restoration quota is nearly reached. One more around April, and that will have to be it until 2010. The zithers I have standing on the sidelines are all very beautiful. Some are in decent shape and only need small crack repairs and a few strings replaced, and some need a lot of work. It is very satisfying to be able to bring these instruments back to life.

Three instruments will be getting a finish applied in the next week. My third banjo-dulcimer 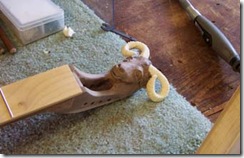 is the largest and has taken the longest to finish. Today I glued the last pieces on it, so I can put the first coat of tung oil on it tomorrow. The picture on the left is the hand-carved ram's head that will be the focus of the piece. The horns are carved from tagua nut.

I'll also be applying Tung oil to the two Cantigas de Santa Maria psalteries I've been working on. I drilled the pin and peg holes 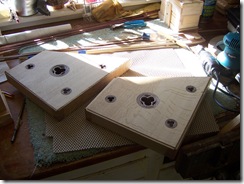 today and started gluing the bridges on.

I'll be taking a little time to finish up a couple of restoration projects while my three instruments are drying. A couple of the zithers I'm working on date back to around 1885-95. A couple others are from the 1920s, and one is from war-time Germany, 1938.

It appears we're in for another drought year here in Santa Cruz. We're two weeks into January, and no rain is in sight. In fact, the temperature rose to 71 degrees today, and is supposed to get up to 73 tomorrow. Spring weather in January??? What's wrong with this picture? Actually, the warm, dry weather is great for applying finishes to my instruments. When it rains, my finishes take forever to dry. On days like these, I can put a coat of tung oil on daily, instead of every two or three days.

I'll be taking pictures and cataloging the different types of zithers I'm going to be restoring soon, and posting them here, so stay tuned.

It's official! Coog Instruments & Folk Art is now Ron Cook Studios. The new web site is up and running. Be sure to check it out at http://www.roncookstudios.com/. There is still a little work to be done, but the important pages are all there and ready for viewing (and buying???)

The Coog Instruments web site will be online for another 6 months or so, for those who have direct links to certain pages. Hopefully, after 6 months, those links will be set for similar pages on the new Ron Cook Studios web site.

New Instrument News: Another banjo-dulcimer is nearing completion. Pictures coming soon. Also, two more Cantigas de Santa Maria psalteries are in the works. They should be done by the end of January.

As I said before, "Onward through the fog!"
Posted by Ron Cook at 5:42 PM 0 comments