San Francisco and Beyond

Last week, we had another fun American Craft Council Show at San Francisco’s Fort Mason. This year we actually seemed to have made a profit, which is great in this still-weak economy. It was a little cool and windy on setup day, but it warmed up during the three-day show quite nicely to short-sleeve weather. 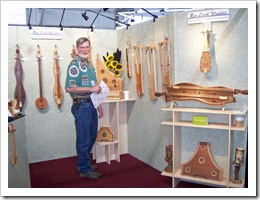 I’ve done this show seven years now and this was the first time my booth was in the back of the exposition hall. All other times I’ve been very close to the front of the buildings. This used to be sort of a “dead zone”, where people didn’t quite make it to, but the new arrangements with wine tasting and “Alt-Craft” artists in the back really drew everyone to the area. We did have a lot of traffic.

Now it’s time to get ready for another big show, the Sausalito Art Festival, booth 121. That will be over Labor Day weekend, starting Friday evening and running through Monday.

Once I get home from a show and unload, I try to take a day or two to decompress, to relax a little before jumping right into carving and creating again. Sometimes it’s hard to get myself back into a creative mode again, but I do finally get the energy 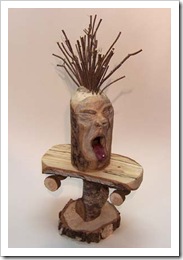 flowing, and I did a couple of days ago. I finished another little fun birdhouse project that I’ve tentatively titled “Thrasher.”  I started doing a few “folk art” birdhouses a few years ago to use up some logs and branches that have been cluttering up my side yard for years. These were pieces of wood I couldn’t use for my instruments or carving, but I didn’t want to through them away. So, the idea came to create a few birdhouses to see if they sold. Little did I know that there are quite a few birdhouse collectors, so a couple of them sold right away. They’re fun pieces, and people really get a kick out of them.

Recently, I got into a research mood when I accidently came across a reference to the Trossingen lyre. The Trossingen lyre is a Germanic-style rote discovered in an 8th century grave (c. 785) in Trossingen, Germany. If was found being clutched by the body of a soldier. What made this find so exceptional is that the instrument had hardly any decomposition. It is the most 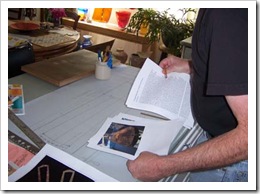 complete instrument of that type and from that period of any yet found. All other lyre discoveries so far have been highly decomposed. None of my early music magazines or online resources ever mentioned the 2002 find, which came just one year after the English Prittlewell discovery, so I just had to keep searching to find out all I could about it.

Well, I did find a poorly translated (from the German) preliminary report on the lyre. It gave most, but not all, of the dimensions, types of wood used, and distinguishing features, like the use of sound holes and leather strap hooks. It was enough to allow me to draw up my own plans. There are a couple of luthiers in England who have already made copies, but I really want to make my own, as close as possible to the original as I can. More news on this as it progresses.

Meanwhile, time to think a little, carve a little, and create a lot. No fog. Onward anyway.

“In Scarlet town where I was born,
There was a fair maid dwellin'
Made every youth cry Well-a-day,
Her name was Barb'ra Allen.”

The other day I completed another Mountain dulcimer in my Folk Legends series, Barbara Allen. She’s black walnut, with a walnut and pine fingerboard and maple tuning pegs. Even though most of my dulcimers have upside down heart soundholes, they are more

significant in their representation of “hard-hearted Barb’ra Allen”.

The song, “Barbara Allen, has been played since at least the 1600s. One of the earliest references to it is in one of Samuel Pepys Diaries in 1666, calling it the “little Scottish tune”. There are countless versions of Barbara Allen, some called Barb’ry Ellen, Barbara Ellen, and Bonny Barbara Ellen. Its origins are somewhere in the British Isles, and both Scotland and England both claim it. The author is unknown. Other versions are found as far afield as Italy and Scandanavia, but there are over 98 versions found so far in Virginia alone. In the late 1800’s, Francis J. Childs compiled and published several volumes of folk music sung in the British Isles. Often, even today, old ballads and folk music is described as Child Ballad number such-and-such. 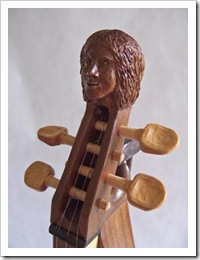 Barbara Allen is Child Ballad #84. For lyrics, and a MIDI example of the music, go to http://www.contemplator.com/child/brballen.html. For lyrics to three different versions, mainly Scottish, go to http://sacred-texts.com/neu/eng/child/ch084.htm. My lead-in first verse above is the start to the most common version, made famous by Joan Baez on one of her first albums in 1960-61. Here are first verses to three other versions that show not only age, but possible location of origin.

Version 1:
IT was in and about the Martinmas time,
When the green leaves were a falling,
That Sir John Graeme, in the West Country,
Fell in love with Barbara Allan.

Version 2:
IN SCARLET TOWN, where I was bound,
There was a fair maid dwelling,
Whom I had chosen to be my own,
And her name it was Barbara Allen.

Version 3:
IT fell about the Lammas time,
When the woods grow green and yellow,
There came a wooer out of the West
A wooing to Barbara Allan.

[Lammas today is August 1st. In medieval times, and up into the Renaissance, Lammas was celebrated around the end of July or the beginning of August. It was a time for the early harvests, fairs, and markets. Baking bread from the first wheat harvest on Lammas Day was a custom, and still is with some Christian cultures.]
[West. Again, West Country, or perhaps Wales]

Back in our West Country

I’ve made quite a few dulcimer ancestors and “hybrid” dulcimers this last year, but it’s been well over a year since I made my last Mountain dulcimer, Matty Groves, which was another in the Folk Legends series. Other Folk Legends dulcimers I’ve made and sold in the past are Lily of the West, My Creole Belle, Ol’ Black Joe, and Anna Thea. Examples of these carvings are in the book, “Ronald Cook, Craftsman”, by Stella Sexmith. (Available through me, or you can order through booksellers. Ask for ISBN #9 780615 275796.)

On my bench about 75% carved is the headpiece for my next Mountain dulcimer, “The White Lady”. This will be part of my mythological series of dulcimers. The name refers to a type of female ghost that legend says appears in rural areas, and who is supposed to have died or suffered trauma in life. White Lady legends are found around the world. Common to many of them is the theme of losing or being betrayed by a husband or fiancé. They are often associated with an individual family line, as a harbinger of death.  The Irish Banshee is one such White Lady. (Maybe I’ll have it done for Halloween. Br-r-r.)

Coming up this weekend, August 14-16, I’ll be exhibiting at the American Craft Council Show at Fort Mason, San Francisco. (Booth 729.) Two weeks later, over Labor Day Weekend, I’ll be at the Sausalito Art Festival. (Booth 121.) I probably won’t be able to update this blog until after I get back. However, I should have several photos to share of both shows.

Anyway, onward, yes, through the fog. 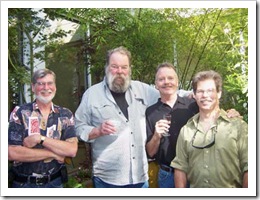 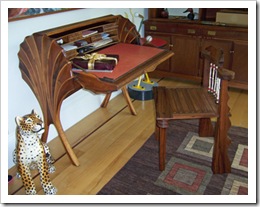 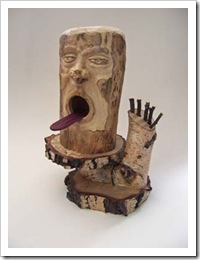