I finally completed the third and final Hans Memling-style hog nose psaltery. Where my others had 21 to 22 strings spaced approximately 5/8” apart, Memling #3 has 29 strings at 1/2” apart. It is a full 4-octave diatonic instrument. Because of the high 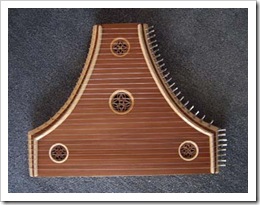 tension of the strings, I used steel strings instead of nylon. It has a very full rich tone and is capable of being played in all the modal scales. It has a salvaged redwood top and black walnut back. The rosettes are maple and black walnut. As I mentioned, this is another psaltery 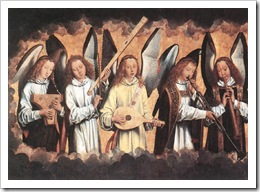 based on the painting by Hans Memling, “Angels Making Music”, the image is a detail of the full altar painting, which is quite wide and narrow and looks almost like medieval Cinerama. Because this is a Flemish painting, the detail is quite exquisite. You can actually count the strings on most of  the instruments. I haven’t made plans, yet, to do any other instruments depicted in the painting.

One psaltery down, seven more to go. Or rather, seven smaller ones to go.

My mini hog-nose psalteries have been very popular for several years, and I completely sold out in 2008. Also in 2008, I picked up quite a bit of salvaged lumber and sale pieces from my local 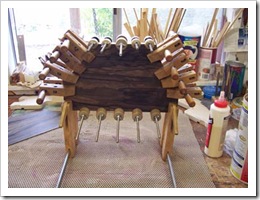 hardwood dealer, so I ripped and cut enough last week to put together seven more of the little instruments. It’s taken a few days, but I now have all of the frames made and the backs sanded and glued on. My small workshop was wall-to-wall psalteries yesterday.

Meanwhile, I have another dulcimer about ready to sand down and complete—probably in a few weeks. Stay tuned.

Yes, it’s been very foggy. Onward through it.

Very nice....
Those are very interesting looking pegs you have clamping the mini psaltery. Where can I find some. I am making a Hognose but haven't reach this stage yet.

Ron! Are you still making psalteries for sale? If so, please tell me the sizes/measurements and costs. And please give me links if there are sound samples. Thank you!
Kristen ExploringSacredSpace at gmail dot com