For months before and after the elections, all we kept hearing was the word "Changes." I'm not one to pick up on current buzzwords and slang that quickly (I adhere to classic English language and grammar), but "change" is appropriate to the future of my craft.

The big change is that as of January 1, 2009, Coog Instruments & Folk Art will be no more. Ron Cook Studios will be the official name, being more descriptive of my work space and less limiting on the type of artwork I create. And... as of today, all newsworthy updates will be posted here.

I recently completed my first test keyboard for the future Chapter House Portative Organ. If you don't remember from past postings, my wife, Stella, and I visited the Westminster Abbey several years ago when we were touring London. We took a 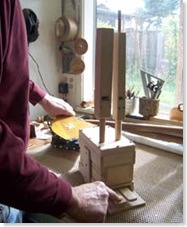 Verger tour that allowed us to see the oldest parts of the Abbey, dating back to the 1200's. One of the older sections was known as the Chapter House. That was where the monks held their abbey business meetings as well as meetings with and by medieval rulers, lords, and businessmen. On two walls are 14th century paintings depicting the judgement and resurrection. All the richly garbed ecumenical figures encircling heavenly host are all playing instruments of the period. I've reproduced all of the stringed instruments, and for years have planned to one day to build the portative organ. That time is getting close. I've made all the pipes, and now I'm working on tests of the wind chest and keys. My first attempt works, but not well enough yet. Too many leaks. Soon I'll have another test piece to try.

Another piece that's coming right along is Banjo-Dulcimer #3. This is another of my 100% salvage wood pieces, made of old 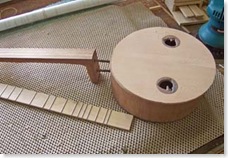 mahogany, from a garden side table, Douglas fir, from a Portland, Oregon, warehouse that was demolished, and various woods from the scrap pile of a local salt-water spear gun maker. I'm finishing up the head carving, but that's not to be seen yet until the Banjo-Dulcimer is finished.

I've sold five dulcimers in the last couple of months, and that's depleted my Early American inventory quite a bit. Last week I 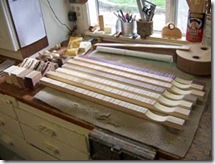 started to rebuild the inventory by cutting the slots and installing frets on seven dulcimer fingerboards. I still have to dress the frets (file the ends smooth), and prepare more head and tailpiece blanks to get them ready for carving.

Last week I journeyed to Watsonville to take advantage of a year-end inventory reduction sale at a hardwood lumber yard. I was able to get some nice pieces of cherry, maple, black walnut, and poplar for as much as 50% off. Some decent pieces were only 25 cents a foot, which are perfect for cutting into blanks for my future chess men/women carvings. Much of the other wood I've already cut and milled into thin pieces for new instrument tops, backs, and sides. I often use mostly salvaged and recycled material, but I do like to use new woods on special carvings and instruments. The lumberyard I purchase wood from is FSC certified, which basically means they sell responsibly harvested woods. They don't purchase any lumber that might come from areas that are damaging the environment. I stay away from tropical woods, unless they're salvaged, and tend to use mainly domestic hard and soft woods.

There will be more "changes" coming later next year, and I'll keep them posted on this blog.

It's been a while since my last posting, and much of the reason for my tardiness is because we've had some terrible internet connection problems that I've only recently (today) solved. Ever since before the election, our internet connectivity was intermittent to non-existent. It finally shut down completely last week. No internet. No e-mail. After what seemed like hours of trying to get AT&T to solve the issue, and going round and round with automated phone support and getting nowhere, I bit the bullet and opted for a cable modem. After running a new cable line to my office area, it took very little time to hook it up and get surfing again. Web pages appear almost before I finish typing in the web address. In other words, pretty damn fast. E-mail is running great now, and I can finally answer e-mails that piled up the last few days. (I used dial-up one time to get my e-mail, but everything was so-o-o-o slow.)

Anyway, change is happening. I'm changing my name, changing my focus, and changing into my work cloths so I can get back into my studio.