We’re a little over a week away from the end of Summer, and we’re still waiting for warm weather. While other parts of the country are still roasting, Santa Cruz has been under a cloud of fog since June. The few sunny days we’ve had were barely in the 70s.

Usually, during the Santa Cruz County Open Studios Art Tour in October, we have beautiful weather. Fingers are crossed! 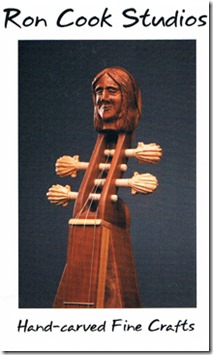 And speaking of Open Studios, this year my studio will be open the second and third weekends, October 8, 9 (North County), and 15, 16 (Encore weekend). My studio number in the artist guide this year is 220.

The Artist Guide and the App (Apple and Android) are again free this year, and the Guide will be distributed in the September 19 issue of Good Times and available throughout Santa Cruz County.

For more information, check out www.artscouncilsc.org.

Coming up the last two weekends this month is the big Anne and Mark’s Art Party. It takes place at the Santa Clara County Fairgrounds. The Gala Opening is Saturday, September 24, and gallery viewing days are September 25, 30, and October 1.

For more information, check out  https://artpartysj.com/. 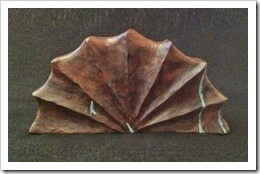 I premiered several pieces of new sculptural work at the American Craft Show in San Francisco last month. The first is “My Number 1 Fan”. It is salvaged black walnut with a turquoise epoxy filler in the cracks and voids. It is approximately 6 inches high, 9 inches long, and 1 1/2 inches deep.

The second is “My Biggest Fan”. It is also salvaged black walnut. It is 11 inches high, 16 inches long, and 5 inches deep at the base. 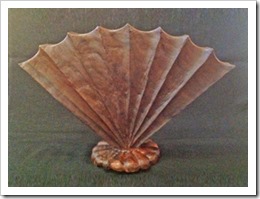 tools. The Arbortech carver is the more powerful and can cut through hard woods with ease. The Merlin 2 carving tool is primarily for softer woods, but I did use the sanding disks on these pieces.

I’ve spindle turned and carved candle sticks before, and they’ve sold quickly. This time I decided to do barley twist candlesticks. The barley twist is totally hand  carved with circular rasps after turning the shafts as spindles.

Again, these are black walnut. They are 15 inches tall, and the turned base is 5 1/2 inches in 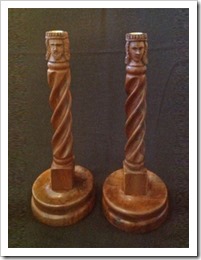 diameter. After carving the shaft, I hand carved the king and queen heads. Because these are salvaged woods, there are some voids. I again filled them with the turquoise epoxy.

The new sculptures have been well recieved, and I’ll have others on display at my Open Studios in October.

I have two major projects in process right now. The first is a new Mountain dulcimer. The dulcimer has always been one of my favorite stringed instruments to make. I love the tone and the simplicity of playing, which is the purpose of these old folk instruments. Everyone can play one quite easily. 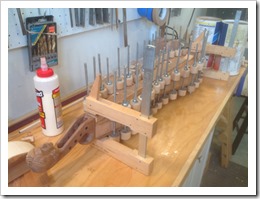 I had carved the head several years ago, and put it aside while working on other new pieces and on antique instrument restorations. (More on that later.) The body is koa, and the trim, not yet on, will be purpleheart. The head and tailpiece are a light walnut. It is the same size as my others, 36 inches long, 6 inches wide, and 3 inches deep. I hope to have this finished by Open Studios.

I’ve made well over 100 dulcimers since I started making them in 1972. Including other stringed instruments I’ve made, the number tops 200.

The photo is from last week when I glued the top on.

Another stringed instrument that has done well is my Symphonies, small hurdy gurdies. I made my first hurdy gurdy, some 25 years ago, from a kit, so I could 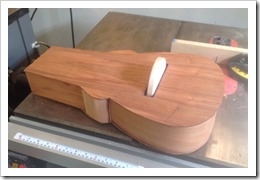 learn how they work. Since then I’ve made two symphonies based on drawings in the 13th century Spanish illuminated manuscript called Cantigas des Santa Maria. Both sold.

Now I’m working on a replica of a Baroque-style hurdy gurdy, which is much larger than the small symphonies. This is a long-term project, because there is much to do to the mechanics and decorations as I put it together. More news on this later.

The photo shows the top and wheel being dry fitted to test the sizing. The head piece isn’t in place yet.

I recently finished restoring another Kumalae ukulele, my sixth, and another very fancy chord zither. I have two more Franz Schwarzer zithers scheduled through the end of this year, but the first won’t arrive until later this month or October. 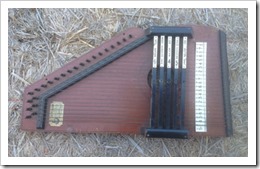 In the meantime, I decided to start restoring some of the many antique zithers I have in storage. The first is a Zimmermann autoharp, model 2 3/4, from around 1895. It has a small crack in the back, but the frame is solid and there are no failed glue joints. It drastically needs cleaning, and some new buttons on the chord bars. This should take a few weeks at the most.

Do you have an antique stringed instrument that’s very special to you? A family heirloom? A collection piece? I have openings in 2017 for you! To see the types of instruments I’ve worked on, check out my Repair Logs on my web site at http://www.roncookstudios.com/ron-cook-studios-repair-logs.html.

Well, that’s about it for now. The light rain has stopped, and the sun is trying to peek through the clouds. Time to get back into my studio!