Yes, it was. The month went fast, but that’s only because so much was going on. Where to start?

In the beginning, there was light. Well, one light anyway. On the First Friday Art Tour, August 5th, 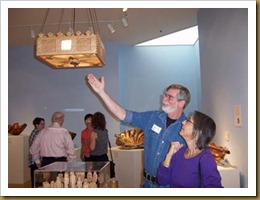 the Santa Cruz Museum of Art & History was wall to wall people who came to see Studio Made: The Santa Cruz Woodworkers, our group show (running through November 13). At noon, several of us woodworkers gave tours and talks on our work for a large, very attentive crowd of wood aficionados and other interested people. For the evening portion of First Friday, I talked to many who wanted to know more about my work. One of my newest pieces, the Medieval Chandelier, got quite a bit of attention.

The exhibit opening got a lot of attention. A very good review by Maureen Davidson (thank you) was published in the Santa Cruz Good Times paper the following week. You can read it HERE. Also, the Time Publishing Group, another local newspaper, announced my participation in the exhibition with a short article. Read that one HERE.

Anyway, after the excitement of First Friday, I had no time to relax. The following day, I feverishly 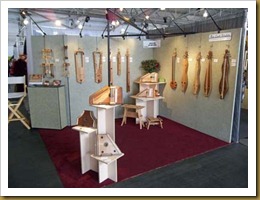 worked to finish up a couple of pieces I wanted to take to the next week’s San Francisco American Craft Council Show at Fort Mason. By Wednesday, August 10th, everything was finished and packed up for the show. Thursday was the drive to San Francisco and booth set up day. I opted for a corner booth this time, which proved to be much better at bringing in people to see and purchase my work. Several people who come to the show every year asked if this was my first year exhibiting, because they never saw me before. 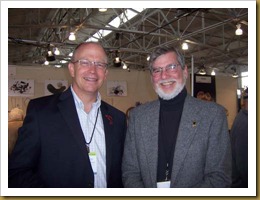 This was actually my seventh year, but I always had a 10 x 10 booth squeezed in the middle of other booths, and many people would just walk by talking and/or focusing on other things. Corner booths from now on! They are easier to set up, easier to tear down, and make my work stand out better.

This is always a fun show. A lot of work for four days, but fun. I’m here with the American Craft Council’s new executive director, Chris Amundson. He’s a great guy who walked the show all three days and seemed to try to meet and talk with every single crafts person. I’m pleased to be associated with the ACC under the leadership of such a great guy.

No sooner did I get home and unload my Jeep, but I had to head back to the museum for a photo 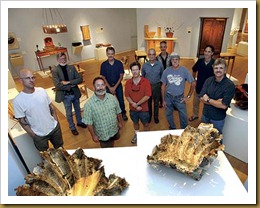 shoot and interview by Wallace Baine, the entertainment writer for the Santa Cruz Sentinel newspaper. He did a lead article on our woodworking group and museum show that appeared in the paper the following Thursday. I think this was the first time all 10 of the Santa Cruz Woodworkers were together at the same time. Click HERE to read the full article, and see some other photos of pieces in the show. Left to right in the photo: Jefferson Shallenberger, Ron Cook (me), Patrick Stafford, Roger Heitzman, Michael Singer, Om Anand, Matthew Werner, Ron Day, Joshua Salesin, and Gary Stevens.

Another antique instrument is on my workbench. My customer, who not only had me restore an 1850 Pennsylvania-German scheitholdt, but also commissioned me to build a custom dulcimer for

him, purchased through ebay a very unique “dulcimer” that was probably made in or around the small farm community of Worth, Missouri, around 1890-1900. The instrument was made by someone named Violet (or Violette), and has five strings, which is unusual for a dulcimer.  The number of strings, the layout of the melody strings over the frets, and the shorter scale length (several inches shorter than a “normal” dulcimer at 24 1/2 inches, make me believe this is actually an American-made Epinette, in the style of an Epinette des Vosges. Also, the maker had a French name, and might have made the instrument as he remembered from the Old Country.

In the last few days, I started removing the sides so I can get inside to repair cracks and solidify the underside of the fingerboard, which is worn through from being played so much. (According 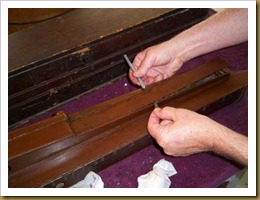 to family history from the ebay seller, it was last played around 1936 or so.) It has a very thick stain, almost like paint, over the entire instrument. The grain barely showed through. Also, the thick stain might not be original to the instrument, but applied after what looks like a very primitive attempt to repair the instrument. The stain is rough, as if it was applied during a dust storm, but probably put on outside or in a dusty workshop. It also covers areas of glue squeeze-out that was not cleaned off. Every glue joint looks as if the glue was forced into cracks and separations at some point.

I believe that the maker would not have done this type of finish on an instrument of such sophisticated construction, but that another person did the “repairs” much later, perhaps in the 1920s. Once I took the sides off, I could see the instrument is all black walnut, which grows especially well on the deep, well-drained soils of north Missouri. The sides came off very easily, since they were attached with hide glue. All it took was a little water to soften the glue, and the sides literally popped off with a little prodding. 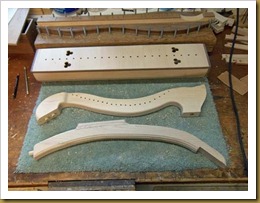 my studio right now. The first is a reworking of an older harp. Actually, it’s my first large medieval-style harp that I made around 4 or 5 years ago. This was also the first I made with a “coopered” back, segments glued in a circular style similar to a wood barrel (like a wine barrel). Even though it was a beautiful sounding harp, I was never really happy with the way it turned out. So, I dismantled it, made a new peg head and post, and reworked the ends of the body. The new parts are ready to carve. I hope to have it done by the time of the Open Studios Art Tour. 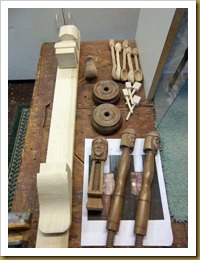 There are a couple of other pieces I’m trying to finish for Open Studios. I’m trying to complete the carving on my third pair of medieval-style candle holders. My first pair, which I planned to save for the woodworking show at the Museum of Art & History, sold last year at the 2010 Open Studios. My second pair, I finished in time to put in the museum. I want another for this year’s Open Studios, just in case another person falls in love with them.

In the left side of the photo on the right are parts for my next Pennsylvania-German scheitholdt. The head is shaped and ready for carving. In the middle of the photo is the head for my next Mountain dulcimer, which is in the form ready for assembly. I need to finalize the carving.

So, as you can see, I have a lot of carving ahead of me.

And Now For Something Completely Different…

Earlier this year, I was contacted by a fellow in Hollister, California, who was giving away a ton of wood in his barn/workshop so he would have room to use his tools. Most of the wood had been given to him by an industrial arts instructor at Gavilan College, and the fellow finally decided to 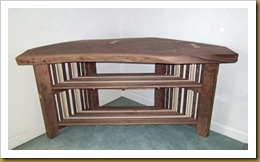 give it to someone to use for artwork. I drove to Hollister, finding a woodworking friend there already, and we sorted through stacks and barrels finding many treasures, and some bug-filled rejects. There was every type of hardwood from every continent in the world. I was able to pick up some beautiful cuts of black walnut burl, and a large 8 foot by 2 1/2 foot by 2 inch thick black walnut slab. I knew as soon as I got it that it would have to be a George Nakashima-style table top. Well, it’s happened! This picture is the unfinished piece in a corner of our bedroom. I still have to make S-shaped doors on the front, and put a finish on it, but it’s nearly done. I even put two Nakashima-style butterfly inserts over top cracks. Wildly different for me!

In the last couple of days, I’ve milled other Hollister black walnut burl pieces for instruments. I also milled some of the South Dakota walnut that was given to me several years ago. Last week I checked the moisture content, and it was just right to mill and use in new work – maybe an autoharp? More to come…

Yes, it’s been a busy month. In September I’ll be trying to complete a few things for Open Studios, so it shouldn’t be quite as crazy as July and August have been. But… who knows. It’s been a very foggy month, and there was no sun again today. September and October are supposed to be the sunniest, nicest months of the year here, so I’m looking forward to some warmth, and a few more barbeques before winter sets in.

It’s been three years in the making, but the exhibition is finally here. On July 29th, a special preview to the members and friends of the Santa Cruz Museum of Art & History was held in the 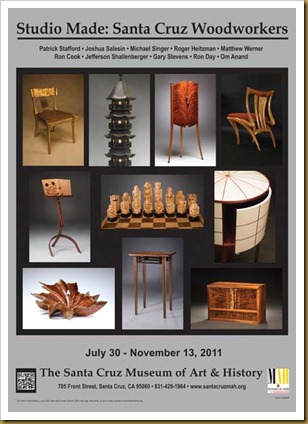 evening. The gallery was full to overflowing, and a good time was had by all.

And coming up this week, on the First Friday Art Walk, August 5th, the Santa Cruz Woodworkers will be on hand to answer questions and give gallery tours at the Museum, starting at noon. The Santa Cruz Museum of Art & History First Friday Art Tour runs from 12 noon to 9 pm. Admission: Free.

The last few months have been incredibly busy for me, and it keeps on keepin’ on. In previous blogs I’ve kept you up to date on pieces I was working on for this exhibition. What I didn’t mention was that I had to make four of my own pedestals for some of my work, plus new hangers for some of the instruments I put on display.

In the middle of all this I had three restorations (two ukuleles, one guitar), and a fourth (dulcimer) showed up on my doorstep, which I’ll start on soon. (More on that remarkable 19th century dulcimer in a later post.) And… to prepare for our house being painted, I had to rebuild part of the roof of my studio (termite problem) and do a lot of cleanup around the house.

Now that the exhibition is up and running, you’d think I’d take some time off. But no-o-o. The San Francisco American Craft Council Show is a little over a week away, and I’m rapidly finishing up three new pieces for it: a medieval oak trestle stool (similar to the one I have at the Museum show), a medieval-style cricket (small, short foot stool), and another pair of candlesticks. By the way, this fantastic crafts show runs August 12-14 at Fort Mason, Festival Pavilion. I’m in booth 209.

And now for something completely different, here’s a series of photos taken at the Santa Cruz Museum of Art & History during the Member preview party: 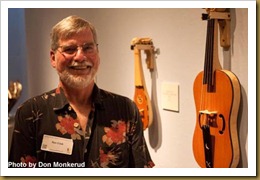 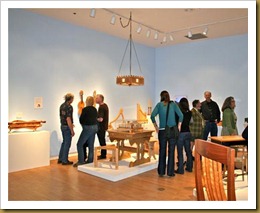 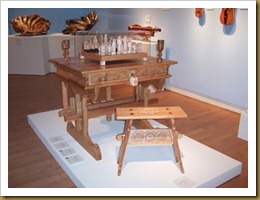 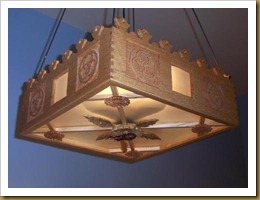 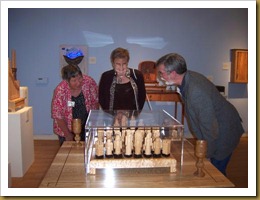 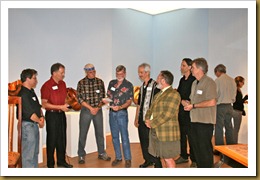 Well, that’s it for now. Time to get back to making sawdust. (i.e., carving). Onward through the fog…