The fog has lifted—finally—and a mini-heat wave is in full swing. It seems as if Summer finally arrived, but only after the Autumnal equinox passed us by. Temperatures reached 103 degrees in Santa Cruz, which, I believe, is the first triple digit day of the year for us. That made for a hot, sweaty day in the studio. 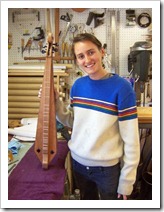 My student finished up last week and was able to complete her second instrument on her last day here. It was a very rewarding experience for me, and from what she told me, her time with me “far exceeded [her] expectations.” I’m pretty proud of how much she accomplished in such a short (15 day) period. She learned how to research early instruments and got a better sense about the  evolution of them. She drew up working drawings for the two pieces she completed, chose woods, and she used the power tools with careful assurance. The two instruments she made are a 13th century Spanish trapezoidal psaltery, and a Mountain dulcimer (19th & 20th centuries) of her own design. Both instruments sounded beautiful when she strung them up. 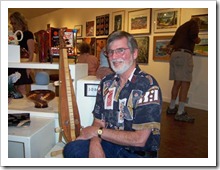 hot), the music lively (Kuzanga played), the food good (but not enough of it), and the art work great, but overwhelming. There seemed to be more art on display this year than in years past, especially more that stretched the size limits around the walls. It was pretty packed in, and I did notice a few 3-D pieces that were hidden from view (you had to stoop to see them) and small 2-D pieces that got lost next to the larger ones. Also, the label  groupings in several areas were way too congested, making it hard to read and tell what went with what. All that said, I admit that the Cultural Council volunteers and crew who set up the exhibit really did a pretty good job working in the large gallery space and with the number of pieces they had to arrange.

As for my Open Studio, I will be open the second and third weekends in October, (9-10, 16-17), from 10am to 5pm. I’m located in the North County section of Open Studios only three blocks from Natural Bridges State Beach. (Follow the green Open Studios signs.) The first weekend is for South County, from the Santa Cruz Yacht Harbor to Watsonville. If you are interested in woodworking, be sure to visit me, of course, but don’t forget my Santa Cruz Woodworkers compadres who are also in Open Studios, Ron Day and Mike Shuler (1st weekend, South County), and Mathew Werner and Michael Singer (2nd weekend, North County). We all do completely different styles of woodworking, and it’s fun to compare/contrast the techniques and finished pieces.

One more thing in the news: My YouTube channel, the Ron Cook Studios Channel, is up and running at http://www.youtube.com/user/RonCook10?feature=mhum. There’s four videos available, all edited from my From Sawdust To Sound, Welcome to My Workshop performance lecture that I gave a few years ago. My third performance was filmed at the Santa Cruz Community TV studio and appeared on Community Television for several months. I talked about the history and construction of the Mountain dulcimer, mountain banjo, and guitar. The Mountain dulcimer section, because of its length, is divided into two parts. There’s original music by friends playing my instruments at the end of each segment. Enjoy!

Once my student left, I didn’t take any time to catch my breath. I jumped right back into the myriad of projects I’ve been working on since the beginning of the year, and started some new ones. 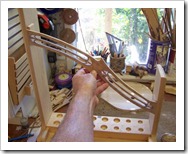 One of my long-running projects has been my last Chapter House-based instrument, the portative organ. As I’ve mentioned before, I’ve made all the stringed instruments depicted in the 14th century  wall paintings in the Westminster Abbey Chapter House in London. A portative organ is also shown in the paintings, and I’ve always wanted to make a pipe organ. A portative organ is small enough for me to make in my small studio, and it is coming along quite well. I’m now working on the bellows and pipe holders (shown in photo).

My student made a very nice dulcimer during her lessons, and it got me going on a new one of my own. I even got my student to steam bend one of the sides. (She did a fine job.) This new one is primarily salvaged white oak, some more of the beautiful figured wood that came from a broken drop-leaf table. I finished the head carving last week and just started assembling the parts over the weekend. I think today I’ll put on the top. 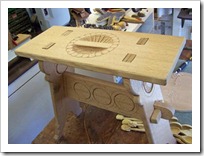 One of my ongoing projects for the Santa Cruz Woodworkers Museum of Art and History show next year (July, 2011) is another medieval-style stool. This is a trestle stool, like a mini trestle table. I’ve started carving the top, legs, and cross member using my new Foredom chisel handpiece. It’s pretty cool (but gets hot if the motor’s running too fast). I’m still getting used to the reciprocating chisel action, and I like what it can do. I’ll still have to use my regular flex-shaft carving burrs and some traditional hand tools to finish up the carved areas, but it should be done in a month or so.

Something new from the Old World. It’s been several years since I made my last hurdy gurdy type of instrument, one of the symphonies depicted in the Spanish 13th century Cantigas de Santa Maria illuminated manuscripts, and I’ve long wanted to do another. It’s happening. This design is based on the second symphony in the manuscript and is made from cherry and maple. This time, for the box, I joined the sides with box joints. I made a jig for my table saw so I could cut accurate joints. This is the first time I’ve used this method and it worked pretty well.

And lastly, my zither restorations are coming along quite well. I have two on the bench, one completed but still awaiting strings, and the other that needs some judicious faux wood grain to cover up a poorly done old repair. (Screws through the top!!! Ouch!) Another zither arrived on my doorstep last week, and another is due after Open Studios. I’m now booked up until next Spring. I can help with research, valuation, and, of course, the repair or restoration of unique stringed instruments. If you have an interesting instrument that’s been in your family or that you purchased, and it needs fixing up, contact me at ron@roncookstudios.com.

As I mentioned above, the Open Studios Art Tour is the first three weekends in October. That will pretty much take up most of my time during that period. After cleaning up my studio, I don’t want to make a lot of sawdust to have to clean up again for the Encore Weekend, so I’ll spend more time working on the zither restorations in my garage shop (my other studio).

I will take a breath after Open Studios. The Tuesday following Encore weekend, I’m heading to Yosemite for a much needed break and to recharge my batteries. Late October in Yosemite is beautiful, and uncrowded. The weather can be mild, but early snows do happen. Time for a little hiking, a little reading, a little writing, and a lot of relaxation. Sigh. 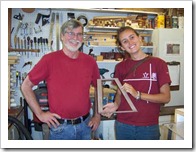